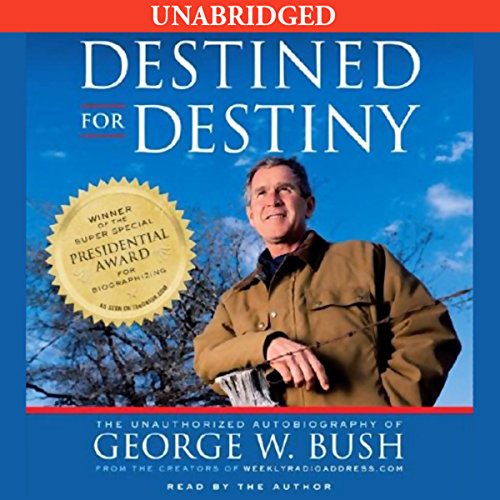 In Destined for Destiny, "George W. Bush" offers listeners an intimate, plainspoken, and sometimes articulate look at the character-shaping achievements that led to his inevitable rise to the office of President of the United States.

Written from the heart, not from the brain, this definitive autobiography takes listeners on a journey through the 43rd President's life, including his hardscrabble beginnings as the child of West Texas oil millionaires, the remarkable academic performance that earned him entry into the finest East Coast schools, and his proud service to the country as an occasional member of the National Guard, sometime around 1972 or 1973.

To help craft this lasting account of his life and leadership, "George W. Bush" turned to two writers who have earned not only his trust but his deep friendship: Scott Dikkers, editor-in-chief of The Onion and coauthor of the #1 best seller Our Dumb Century, and Peter Hilleren, former producer for public radio and some of the nation's finest public-access cable television stations.

Dikkers and Hilleren call on their finely honed journalism expertise every week to write and record the President's weekly radio address on WeeklyRadioAddress.com. Their work on such stirring addresses as "June Terror Update" and "The Pope Is Dead" made them the ideal choice to meet the challenge of chronicling the visionary mark left on history by its shining light, President George W. Bush.

"Bush detractors will find this book hilarious; his fans will be apoplectic." ( Booklist)