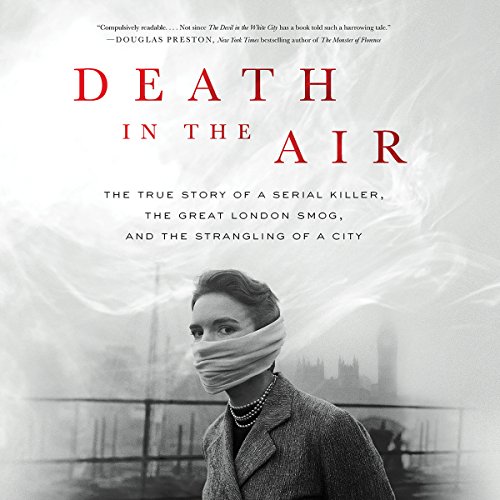 Death in the Air

A real-life thriller in the vein of The Devil in the White City, Kate Winkler Dawson's debut, Death in the Air, is a gripping, historical narrative of a serial killer, an environmental disaster, and an iconic city struggling to regain its footing.

In winter 1952, London automobiles and thousands of coal-burning hearths belched particulate matter into the air. But the smog that descended on December fifth of 1952 was different; it was a type that held the city hostage for five long days. Mass transit ground to a halt, criminals roamed the streets, and 12,000 people died. That same month, there was another killer at large in London: John Reginald Christie, who murdered at least six women. In a braided narrative that draws on extensive interviews, never-before-published material, and archival research, Dawson captivatingly recounts the intersecting stories of the these two killers and their longstanding impact on modern history.

"What's great about Death in the Air is not just its stunning premise, but also its deep reach into the life of London in the mid-twentieth century. It's a wonderful read. Welcome to the metaphysics of fog." (S. C. Gwynne, New York Times best-selling author of Empire of the Summer Moon and Rebel Yell)
"Journalist Dawson writes the parallel, shocking histories of the suffocating smog that menaced London, ultimately killing thousands, in December 1952, and a serial killer's salacious murders and trial the following year. Focusing on the powerful press' response to both killers and offering food for thought on what constitutes crime, responsibility, and progress, Dawson delves into heated parliamentary debates between Churchill's Conservative cabinet and Laborite agitators; first-person accounts from doctors, policemen, and other smog survivors; court records; and Christie's own, jaw-dropping account of his murders." ( Booklist)