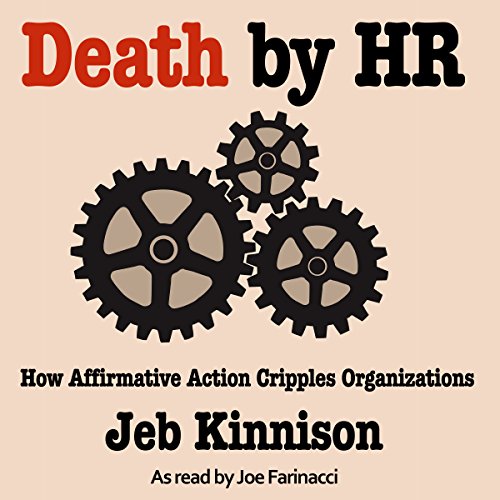 Human resources (HR) departments are widely disliked, and job searchers are generally advised to contact the hiring manager directly if they really want to be considered for a job. There are good reasons why HR acts like an arm of the government bureaucrats pressuring companies to hire more protected minorities and women - because that's what they are, in many companies.

From the best-selling author of Avoidant comes a fresh look at HR and the hiring of mediocre employees favored by affirmative action programs. It's a new age of incompetence, with brain-dead, unaccountable employees holding sinecures at the heart of our government agencies and regulated institutions like banks and hospitals, protected by affirmative action and union policies. The rot is spreading as pressure from state and federal regulation of companies has increased, promoting an internal compliance bureaucracy that has devalued the best job candidates and employees and promoted affirmative action and diversity over team productivity.

The result has been ever-more-costly failures and a steep decline in performance. From the mortgage meltdown that brought down the world's economy in 2008, to the disastrous launch of the healthcare.gov website for Obamacare, major segments of business and government in the US have grown more expensive and less competent over the past few decades. Billions of dollars of waste in government contracts for IT projects, weapons systems, and service failures at the VA are in the news every day. Public schools are widely seen as mediocre, and in the poorest urban districts they are failing to provide a decent education for the students who need good schools the most to make up for bad family backgrounds. Costs for regulated services like schools, colleges, medical insurance, drugs, courts, prisons, and infrastructure like roads and bridges rise far faster than inflation, while time to complete major projects stretches out to decades, and many fail completely and are cancelled after billions have been spent. And the rot is spreading as government pushes businesses to adopt similar employment policies, with HR enforcing government mandates that compromise competitiveness and give overseas companies the advantage.

Silicon Valley and the tech industries are the next targets. If you're a manager at a tech company, we'll suggest some ways to protect your people from HR and its emphasis on credentials and affirmative action (AA) over the best fit for a position. Corporate leaders need to be sure their HR departments are managed to prevent infiltration by staff more interested in correct politics than winning products. And we'll show why appeasement of diversity activists is a dangerous strategy that may make your organization a target for further extortionate demands.

The next battlefield after high tech is discretion in hiring, which the activists believe must be limited to force employers to hire any candidate "qualified" for a job as soon as they apply. Only a few radicals are proposing this kind of blind hiring now, but continuing successes in getting firms to bow to their diversity demands will result in a list of new demands. We have already seen Seattle pass an ordinance requiring landlords to rent apartments to the first applicant who qualifies. And similar movements in hiring - supposedly to prevent discrimination by eliminating management choice of who to employ - are coming soon.