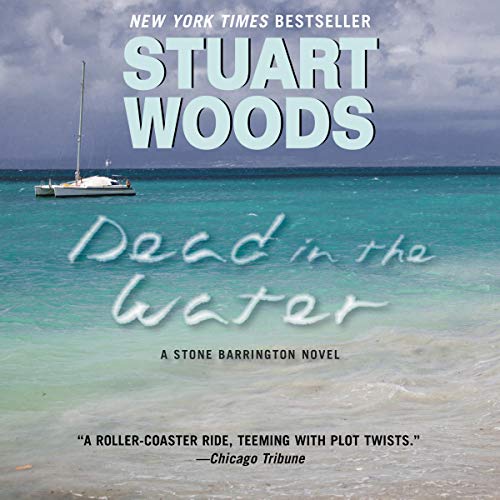 Stone Barrington is back. Stuart Woods has created no better known or loved character than the ex-cop, Manhattan attorney, and investigator whose work treads the thin line between the respectable practice of law and the dark side of humanity.

In Dead in the Water, Stone has hardly arrived in St. Marks, a lovely Caribbean island nation, on a sailing vacation when something very strange happens: A beautiful young woman sails into the harbor, entirely alone on a large yacht. Before long she is under the intense scrutiny of the local authorities, in the very considerable person of Sir Winston Sutherland, the minister of justice. The problem is, though she arrived alone, she had departed the other side of the Atlantic in the company of her husband, a well-known writer, who is no longer in evidence.

Evidence is what fascinates Stone Barrington, and he is all that stands between the apparently innocent Allison Manning and the patently evil intent of Sir Winston, whose motives are unclear. What is clear is that the St. Marks system of justice bears little resemblance to the American courts to which Stone is accustomed and that his smallest error could prove fatal to his client.

Dead in the Water is a roller-coaster ride, teeming with the plot twists that have made the novels of Stuart Woods New York Times best sellers and international hits.