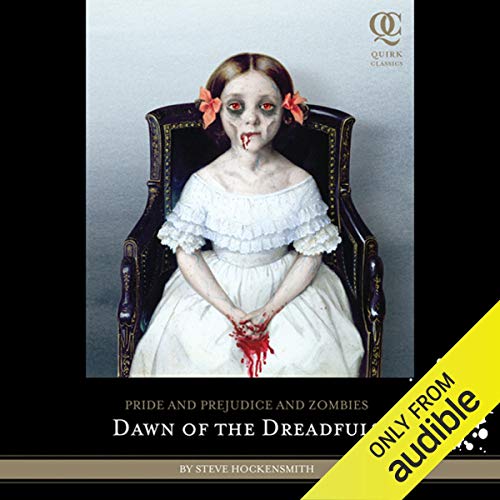 Dawn of the Dreadfuls

Dawn of the Dreadfuls

With more than one million copies in print, Pride and Prejudice and Zombies was the surprise publishing phenomenon of 2009. A best seller on three continents, PPZ has been translated into 21 languages and optioned to become a major motion picture.

In this terrifying and hilarious prequel, we witness the genesis of the zombie plague in early 19th-century England. We watch Elizabeth Bennet evolve from a naive young teenager into a savage slayer of the undead. We laugh as she begins her first clumsy training with nunchucks and katana swords and cry when her first blush with romance goes tragically awry.

Written by acclaimed novelist (and Edgar Award nominee) Steve Hockensmith, Dawn of the Dreadfuls invites Austen fans to step back into Regency England, Land of the Undead!

"Hockensmith does not abandon Austen’s original characters. Mrs. Bennett is the most true to the original, and even silly Kitty and Lydia are the same, only they fight instead of fuss over men. Elizabeth, from whose point of view significant elements of the story are told, is the most fully developed, and while she departs a little from the original, it’s not so far as to make Austen fans cringe (given that they’re OK with zombies, of course). This is a must-read for the growing legion of alternate-Austen fans (including, naturally, everyone who has read Pride and Prejudice and Zombies)." (Booklist)

"Narrator Katherine Kellgren sells the unlikely combination of Jane Austen’s Elizabeth Bennet and zombie invasions with wholehearted glee. As the Bennet sisters train with a fighting master for their do-or-die zombie battle, the story moves from scenes of proper conversation to scenes of proper attack stance. Kellgren expresses the British fighting spirit with abandon. She’s smart, funny, and unrestrainedly dramatic, everything that a book chronicling Regency maidens meting out murderous zombie vengeance needs. Kellgren’s voices are thoughtfully chosen, especially Mrs. Bennet’s shrieks over propriety. Listeners can’t help but be drawn into the riotous action even as they realize the story is ludicrous. For sheer audacity of spirit, Kellgren deserves acclaim." ( AudioFile)
“Mixing taught horror-movie action with neo-Austen meditation on identity, society, and romance, this happy sacrilege is sure to please fans of Grahame-Smith's original mash-up.” ( Publisher’s Weekly)