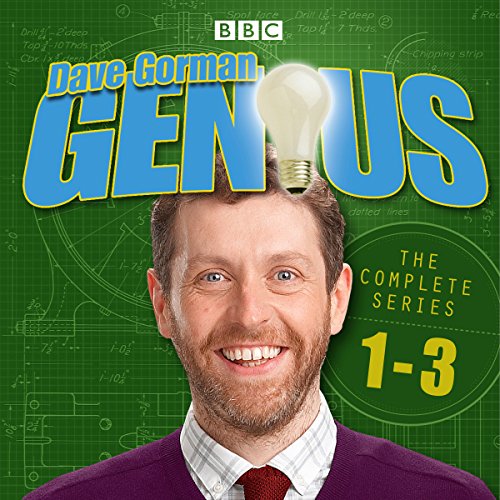 The complete Genius radio series, in which Dave Gorman and his celebrity guests consider the ridiculous, unworkable, but sometimes genius inventions of the public.

Guests such as Stewart Lee, Johnny Vegas, Germaine Greer and Charlie Brooker peruse a parade of proposals, be they innovations, gadgets, gizmos, philosophies or follies, in an attempt to sort the worthy from the worthless. Will they unearth some genuine gems of genius? And which pitch will win the legendary Genius trophy?

Ideas include the use of breathalysers on mobile phones to stop you making regrettable calls, a 99p coin, genetically engineered mini elephants as pets, Bovril as a fizzy drink, virtual reality headsets for chickens, Lego prisons and the best thing since sliced bread - perforated bread.

If you've ever had an ingenious invention, a sublime plan for solving problems both small and large or a twisted scheme for making the world a better - or more interesting - place, then Genius is the midwife to your brainchild.

Bonus content: Dave Gorman’s Pub Olympics. In this one-off, very silly panel show, contestants Chris Addison, Roisin Conaty, Geoff Lloyd and Seymour Mace compete for gold medals in a series of ridiculous rounds, very loosely based on sports. Usain Bolt can run the 100m in 9.58 seconds. What do the panellists think they could do in 9.58 seconds? And what Olympic themed panel show would be complete without Quiz Akabusi?