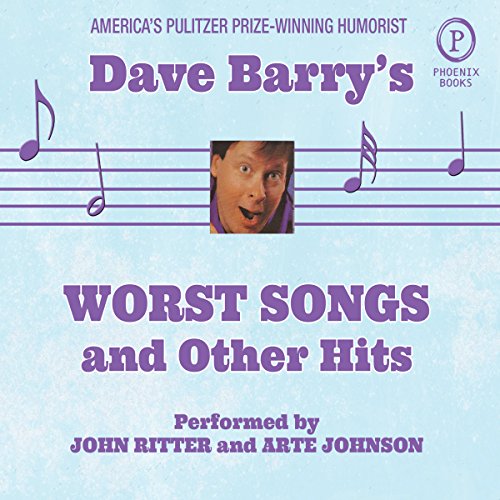 Dave Barry didn't know what he was letting himself in for when he invited his Legion of Alert Readers to submit their nominees in the Bad Song Survey. "Song badness," he soon learned, "is an issue that Americans care deeply about."

Now John Ritter and Arte Johnson present for you the songs that Americans love to hate. There is Gary Puckett and the Union Gap Band's "Young Girl" ("Young girl, get out of my mind, my love for you is way out of line..."), which is not to be confused with "Woman", and "This Girl Is a Woman Now" (which some readers believe to be the same song). Another strong contender is Neil Diamond's "Play Me", particularly the part where he trills, "song she sang to me, song she brang to me..." And don't forget "Candy Man", "Johnny Get Angry", "Itsy-Bitsy Teeny-Weeny Yellow Polka-Dot Bikini", "Wildfire", and the entire Barry Manilow oeuvre.This much is guaranteed: as soon as you hear even a snippet of these songs, you won't be able to get them out of your head!