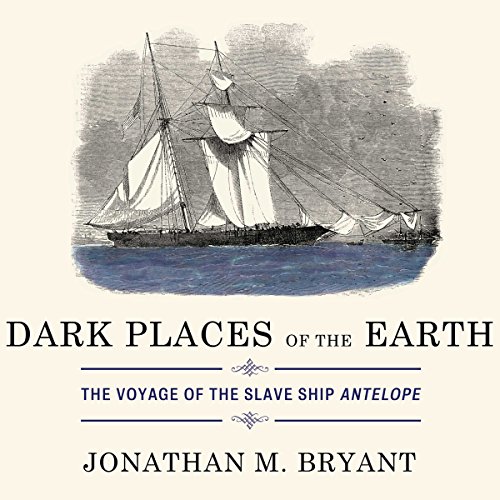 Dark Places of the Earth

In 1820 the slave ship Antelope was captured off the Florida coast. Though the slave trade was prohibited, slavery was still legal in half of the United States, and it was left to the Supreme Court to determine whether the nearly 300 Africans onboard were considered slaves - and if so, to whom they belonged. Mining untapped archives, Jonathan M. Bryant recounts the Antelope's fraught journey across the Atlantic, leading up to the momentous courtroom battle of 1825 that defined the moral and legal implications of slavery for a generation and was enormously influential in the Amistad trial. From Havana ports to the West African coast, from Georgia plantations to a Liberian settlement, Dark Places of the Earth creates a multidimensional portrait of the global slave trade. Bryant's work restores the Antelope to its rightful place as one of the most shocking and unjustly forgotten episodes in American legal history.

"Dark Places of the Earth is a meticulously researched scholarly history that packs an emotional punch. Jonathan M. Bryant writes smoothly and unhurriedly in language fully accessible to the general reader. He relates the story behind a complicated and momentous case before the US Supreme Court, filling it with human interest and suspense. His sensitive characterizations of the actors in his narrative - pirates, lawyers, politicians, judges, and slaves - are worthy of a novel." (Daniel Walker Howe, Pulitzer Prize-winning author of What Hath God Wrought: The Transformation of America, 1815-1848)
"With exhaustive research and in-depth analysis, Jonathan Bryant sheds new and revealing light on a dark chapter in the history of American slavery, and on a Supreme Court decision that, despite its faults, deserves to be better known." (Brian McGinty, author of Lincoln’s Greatest Case)
"In this fascinating and engagingly written study, Jonathan M. Bryant illuminates a largely forgotten - but highly significant - episode in American legal history. Based on prodigious and meticulous research, Dark Places of the Earth will appeal to general readers and scholars alike. An important, original book." (Douglas R. Egerton, author of The Wars of Reconstruction: The Brief, Violent History of America’s Most Progressive Era)

Fascinating. History and law made undwrstandable,

Hope to hear more from Mr. Bryant on other cases if precedence that determined history.