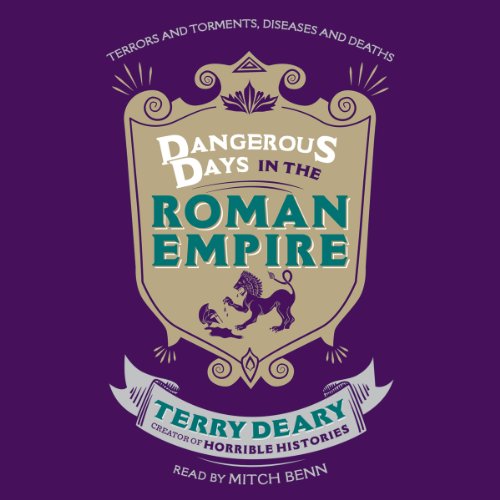 Dangerous Days in the Roman Empire

Dangerous Days in the Roman Empire is the first in a new adult series by Terry Deary, the author of the hugely best-selling Horrible Histories, popular among children for their disgusting details, gory information and sharp wit, and among adults for engaging children (and themselves) with history.

The Romans have long been held up as one of the first 'civilised' societies, and yet in fact they were capable of immense cruelty. Not only that, but they made the killing of humans into a sport. The spoiled emperors were the perpetrators (and sometimes the victims) of some imaginative murders.

Dangerous Days in the Roman Empire will include some of the violent ways to visit the Elysian Fields (i.e. death) including: animal attack in the Coliseum; being thrown from the Tarpeian Rock - 370 deserters in 214 AD alone (or if the emperor didn't like your poetry); by volcanic eruption from Vesuvius; by kicking (Nero's fatal quarrel with the Empress Poppea); from poison mushrooms (Claudius); by great fires; torturous tarring; flogging to death; boiling lead (the invention of 'kind' Emperor Constantine); or being skinned alive by invading barbarians. Dangerous Days in the Roman Empire looks at the back-story leading up to the victims' deaths, and in doing so gives the general reader a concise history of a misunderstood era.