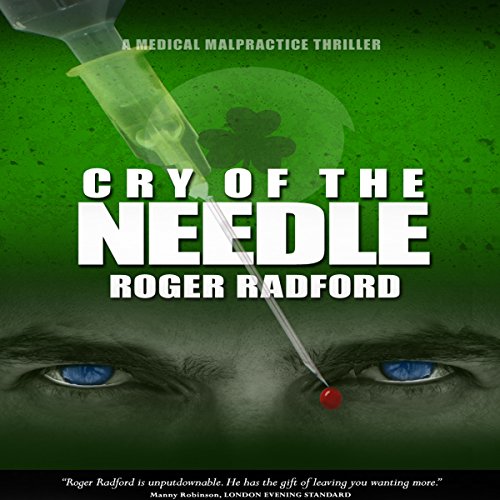 Cry of the Needle

Kieran Kelly's world turns upside down when his wife's health is devastated by an epidural in childbirth. Incensed by damning evidence of medical and pharmaceutical misconduct, the tormented former IRA hit man plots revenge against those he deems responsible, including a government that doesn't seem to care.

Kelly's quest brings him face-to-face with an alcoholic physician, an altruistic scientist, and a corrupt government minister - but not before the love of a stunningly beautiful but crippled countess makes him question his motives. He meets Countess Magda von Esterhazy at a meeting of a self-help group for victims of the uniquely painful iatrogenic (doctor-caused) disease that struck down his wife. Magda awakens feelings that he thought he had lost forever.

Meanwhile, one of Kelly's targets, scientist Jonathan Tring, finds himself embroiled in the Machiavellian machinations of his boss, the gruff and corrupt owner of a pharmaceutical company, and the man's stunning young American wife. In all the mayhem, Tring, too, finds love - and desperately wants to live to enjoy it.

Cry of the Needle is a searing tale of love and vengeance. Revenge is a dish best served Irish.