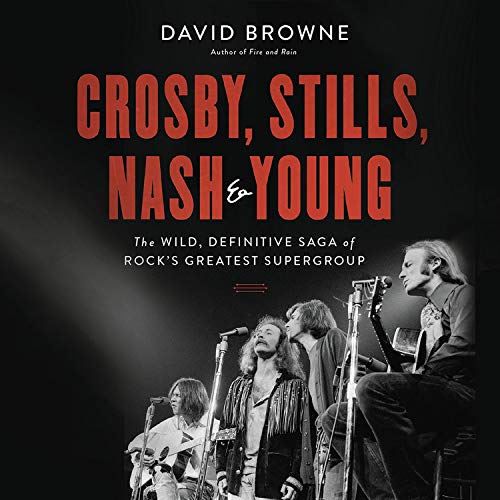 "This is one of the great rock and roll stories." (New York Times Book Review)

Even in the larger-than-life world of rock and roll, it was hard to imagine four more different men. Yet few groups were as in sync with their times as Crosby, Stills, Nash and Young. Starting with the original trio's landmark 1969 debut album, their group embodied much about its era: communal music making, protest songs that took on the establishment and Richard Nixon, and liberal attitudes toward partners and lifestyles. Their group or individual songs - "Wooden Ships", "Ohio", "For What It's Worth" (with Stills and Young's Buffalo Springfield) - became the soundtrack of a generation.

Over the decades, these four men would continually break up, reunite, and disband again - all against a backdrop of social and musical change, recurring disagreements, and self-destructive tendencies that threatened to cripple them as a group and as individuals. In Crosby, Stills, Nash and Young: The Wild, Definitive Saga of Rock's Greatest Supergroup, Rolling Stone senior writer David Browne presents the ultimate deep dive into rock and roll's most musical and turbulent brotherhood. Featuring exclusive interviews with band members, colleagues, fellow superstars, former managers, employees, and lovers - and with access to unreleased music and documents - this is the sweeping story of rock's longest-running, most dysfunctional, yet preeminent musical family, delivered with the epic feel their story rightly deserves.

"Few rock and roll sagas are as genuinely epic as this one, in which, over nearly five decades, four enormous talents/egos come together, find musical perfection, and fall apart in seemingly unlimited ways. With unparalleled skill and wry insight, David Browne chases down the details of CSNY's unique collaboration, uncovering larger truths about creativity and collaboration, debauchery and recovery, and a generation's harmonizing heart." (Ann Powers, author of Good Booty: Love and Sex, Black and White, Body and Soul in American Music)

"A vivacious journey into a collision of four oversized egos - three of them producing a harmony as strange and inspired as any in rock and roll, a fourth achieving work of such strange and stunning genius that the world has yet to catch up. Beneath those harmonies was much clangor and static, even more than we knew, and Browne captures it all in this magnificent and definitive book." (David Yaffe, author of Reckless Daughter: A Portrait of Joni Mitchell)

"[Browne] appears to have talked to nearly every living soul with a part to play in the band's long career.... An excellent portrait of a troubled partnership...celebrates those fine moments when the band merged to make such epochal songs as 'Suite: Judy Blue Eyes' and 'Ohio.'" (Kirkus Reviews)