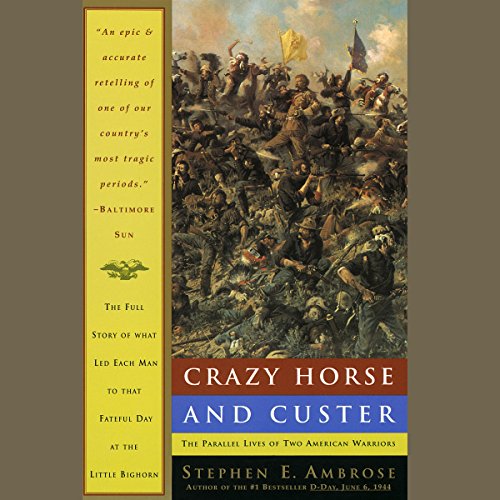 On the sparkling morning of June 25, 1876, 611 men of the US 7th Cavalry rode toward the banks of the Little Bighorn in the Montana Territory, where 3,000 Indians stood waiting for battle. The lives of two great warriors would soon be forever linked throughout history: Crazy Horse, leader of the Oglala Sioux, and General George Armstrong Custer. Both were men of aggression and supreme courage. Both became leaders in their societies at very early ages; both were stripped of power, in disgrace, and worked to earn back the respect of their people. And to both of them, the unspoiled grandeur of the Great Plains of North America was an irresistible challenge. Their parallel lives would pave the way, in a manner unknown to either, for an inevitable clash between two nations fighting for possession of the open prairie.

"Movingly told and well written...a fine contribution, one that will be read with pleasure and admiration by general reader, student and scholar alike. Ambrose has breathed new life into the familiar facts." ( Library Journal)
"An epic and accurate retelling of one of our country's most tragic periods." ( Baltimore Sun)

Based on the old transcripts and interviews directly from the people who knew both Crazy Horse and Custer. Paints a good picture of the times back then and the mindset of both warriors without being judgemental from todays perspective. A rare and excellent piece of bringing history to life. Well narrated by Richard Ferrone.