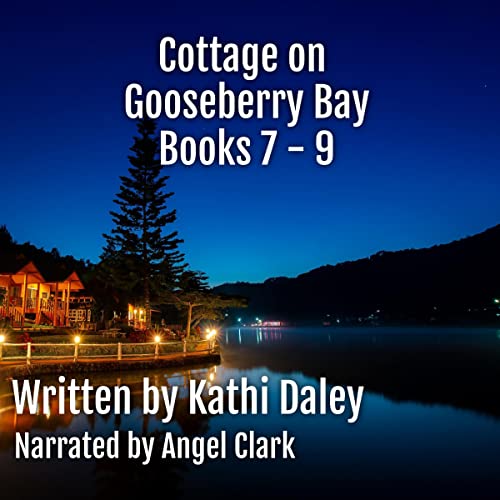 USA Today best-selling author Kathi Daley brings you a heartwarming mystery series about finding answers and fostering hope while building friendships and embracing the magic of life by the sea and small town holidays.

Ainsley Holloway had come to Gooseberry Bay to find answers about her past. She’d come to find an explanation for the dreams that haunted her after the death of the cop who’d both rescued and raised her. And she’d come to identify the family she couldn’t remember but knew in her heart she’d once belonged to.

Ainsley hoped that by finding these answers, she’d also find healing. She hoped that once she’d resurrected the memories buried deep in her mind, she’d find peace.

The Cottage at Gooseberry Bay is a series about not only finding answers, but finding hope.

It’s a series about family and friendship.

It’s a series about shared holidays, festivals, and celebrations.

It’s a series about shared heartbreak and hardship.

And it’s a series about the bond that can be forged amongst strangers when tragedy binds two or more individuals with a common goal.

In book 7 in the series, Ainsley is approached by representatives from The Geek Squad who hope to hire her to find a missing physicist who they believe has met with foul play although they have no evidence to support this assumption. The cops won't help given the lack of evidence so Ainsley agrees to look into things in exchange for their help with the annual haunted house for which she'd been recruited to line up volunteers. Meanwhile, Parker, Josie, and Jemma, are all involved in the annual Halloween festivities, Ainsley continues to look for Avery, and Adam begins making plans for changes in his own routine.

In book 8 in the series, Ainsley is out walking her dogs, Kai and Kallie, when she finds a man dressed as Santa sitting on a bench. The man has blood on his jacket and looks to be confused so Ainsley goes over to speak to him. When she discovers that the man seems to have some sort of amnesia and cannot remember who he is or why he is in Gooseberry Bay, Ainsley decides to take him back to the peninsula. She enlists the help of the others to help her find the identity of the man, but as they begin their search they find evidence that a man dressed as Santa was last seen running from the scene of a murder. The man seems like such a nice guy and Ainsley and the others find it hard to believe that this particular Santa is a killer. Deputy Todd figures he has all the proof he needs and arrests the man but Ainsley still isn't sure so she sets out to dig a bit deeper hoping the truth is buried deep within the evidence. Meanwhile, Adam seems to have become an honorary Geek Squad member, Ainsley gets a new clue about the whereabouts of Wilma, and it's Christmas, which means the annual ball out at the Winchester place, local events, tree cutting, holiday decorating, and everything that makes a cozy mystery Christmas, cozy.

In book 9 in the series, Adam is away on business leaving Archie to keep tabs on Skeet and the Geek Squad who have been participating in a series of geocaching challenges. The squad has been doing quite well and are invited to join a closed group where the caches are treasures worthy of finding. The problem is that the gang begins to suspect there may be more going on than simple treasure hunts. They enlist Ainsley's help to get to the bottom of things. Meanwhile Ainsley is nervously awaiting the okay to schedule a visit with a very important person in her life and Parker is assigned a story that seems to have more twists than the Gooseberry River.