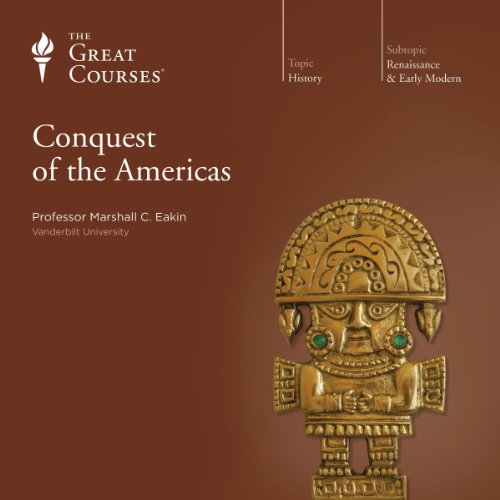 Conquest of the Americas

Conquest of the Americas

Was Christopher Columbus's voyage to the Americas in 1492 the most important event in the history of the world?

Professor Eakin's provocative answer is a resounding "Yes" - as he presents his case in an intriguing series of 24 lectures. He argues that the voyage gave birth to the distinct identity of the Americas today by creating a collision between three distinct cultures - European, African, and Native American - that radically transformed the view of the world on both sides of the Atlantic. These thoughtful lectures will remind you that when Columbus completed his voyage, he found a people unlike any he had ever known, living in a land unmentioned in any of the great touchstones of Western knowledge. You'll learn how the European world, animated by the great dynamic forces of the day, Christianity and commercial capitalism, reacted to Columbus's discovery with voyages of conquest-territorial, cultural, and spiritual - throughout the New World. And you'll see the traumatic consequences - not only for the native peoples of the Americas, but for the people of Africa, as well, millions of whom had their lives altered by the transatlantic slave trade that resulted. Yet these lectures are far more than an account of heroes and villains, or victors and victims. They form a dramatic, sweeping tale of the complex blending of three peoples into one-forming new societies and culturesthat were neither European, African, nor Native American, but uniquely American. While Professor Eakin readily identifies his own interpretation of events, he generously showcases competing views, and you'll benefit enormously from the many works he cites for further study.