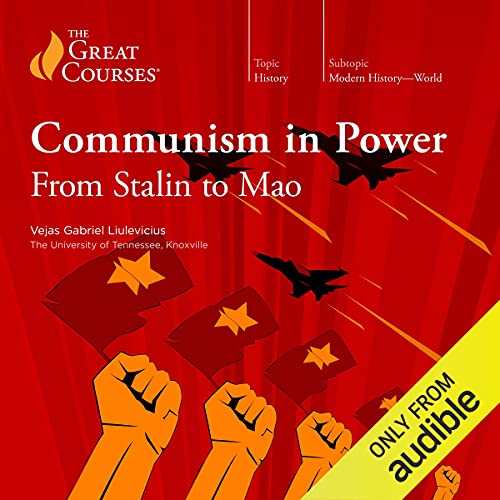 Trace the growth of communism from Stalin’s consolidation of power to the establishment of communist regimes in Eastern Europe, China, Korea, Vietnam, and elsewhere in Communism in Power: From Stalin to Mao. These 12 half-hour lessons shed intriguing light on a revolutionary movement that played an outsized role in the 20th century and continues to shape 21st-century geopolitics.

The period covered includes the Cold War, which saw the height of ideological conflict between communist and capitalist states. At the time, the true extent of internal repression imposed by communist governments was not widely known, notably the vast Gulag system organized under Stalin, Mao’s catastrophic Great Leap Forward and Cultural Revolution, and the “Killing Fields” of the Khmer Rouge in Cambodia. These organized campaigns against mostly innocent citizens led to many tens of millions of deaths.

A specialist in modern European history, Professor Vejas Gabriel Liulevicius is the Distinguished Professor in the Humanities at the University of Tennessee, Knoxville, where he was awarded the university’s top two teaching awards. In Communism in Power: From Stalin to Mao, he masterfully untangles the rivalries, contradictions, and doctrinal heresies that plagued communism in different countries, undermining the dream of worldwide communist comradeship. The course also covers attempts by communists to get a foothold in the United States; the widespread admiration for Soviet achievements, fueled by official propaganda; the growing disillusionment with life under Marxism-Leninism; and the day-to-day adaptations of ordinary people, including the dark jokes they made about their plight.