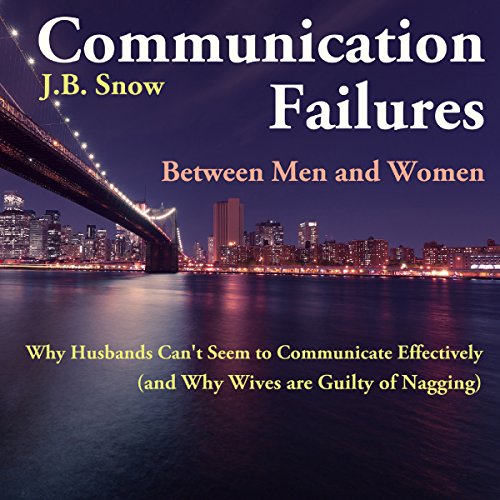 Communication Failures Between Men and Women

Communication Failures Between Men and Women

We've known for centuries that many men and women struggle in their marriages to communicate with, connect to, and relate to each other. It seems that even the most intelligent men marrying the most intelligent women seem to be on a completely different playing field from each other. Once the honeymoon period of marriage wears off, we are left scratching our heads. Our loving partner has become seemingly so difficult and averse to conversation that we stop bothering to talk to them at all.

It is said that the average women says four words per day to her husband, most of which is some type of request relating to the house, finances, or children. Is it that men are from a different planet and speak a completely different language from their wives? With the divorce rate higher than it was a century ago, it seems that many couples have given up trying to have any meaningful conversation at all.

But why is there a discord between the sexes? The truth is that there are many ways in which men relate to each other that strongly interfere with their communication as it pertains to women. Men who struggle to talk with women have little experience in having a mutually beneficial conversation with any woman, be it their mom, sister, coworker, or wife. They can turn on the charm and relate with witty banter, but when it comes to conflicts and emotional discussion, they tend to fall short. This inability for husbands to communicate effectively with their wives, other female coworkers, or other female family members causes strained relationships and a feeling of emotional invalidation on the end of the female.

Let's explore the different ways in which men communicate differently than women and which hinder the mutual exchange of information between men and women in all types of relationships.