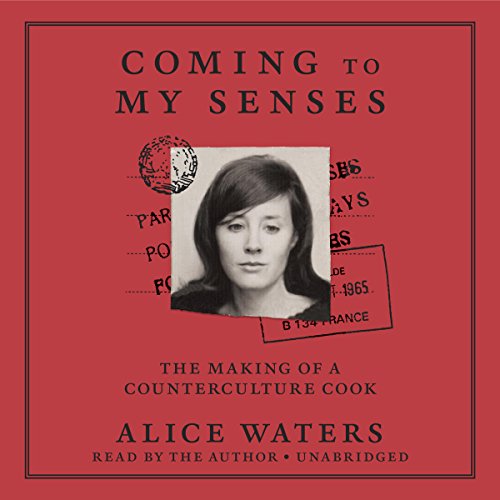 Coming to My Senses

Coming to My Senses

To hear Alice Waters explain how she cooks feels like visiting the Sibyl at Delphi: an experience that’s intimate, authoritative, even a bit otherworldly. Her voice is both oracular and warm, imbued with decades of authority as a chef, but also the occasional breathiness of a mortal being looking back over the journey that made her a celebrity restaurateur, a pioneer of "California Cuisine" at Chez Panisse, and an activist for whole, organic food. Listening to Alice Waters humbled and inspired me, and renewed my devotion "to treat...food as a living thing." —Christina, Audible Editor

The long-awaited memoir from cultural icon and culinary standard bearer Alice Waters recalls the circuitous road and tumultuous times leading to the opening of what is arguably America's most influential restaurant.

When Alice Waters opened the doors of her "little French restaurant" in Berkeley, California, in 1971 at the age of 27, no one ever anticipated the indelible mark it would leave on the culinary landscape - Alice least of all. Fueled in equal parts by naiveté and a relentless pursuit of beauty and pure flavor, she turned her passion project into an iconic institution that redefined American cuisine for generations of chefs and food lovers.

In Coming to My Senses, Alice retraces the events that led her to 1517 Shattuck Avenue and the tumultuous times that emboldened her to find her own voice as a cook when the prevailing food culture was embracing convenience and uniformity. Moving from a repressive suburban upbringing to Berkeley in 1964 at the height of the free speech movement and campus unrest, she was drawn into a bohemian circle of charismatic figures whose views on design, politics, film, and food would ultimately inform the unique culture on which Chez Panisse was founded.

Dotted with stories, recipes, and letters, Coming to My Senses is at once deeply personal and modestly understated, a quietly revealing look at one woman's evolution from a rebellious yet impressionable follower to a respected activist who effects social and political change on a global level through the common bond of food.

"[Waters] does an artful job of showing how even the most apparently unrelated experiences helped lead her to her profession. She is also quite frank about her failures; her relationships with lovers, friends, and colleagues; and her pride in remaining a part of the 1960's counterculture that nourished her. An almost charmed restaurant life that exhales the sweet aromas of honesty and self-awareness." (Kirkus Reviews)

"Alice Waters's narration is so approachable that it's as if she walks up to your table wearing an apron, carrying an enticing plate of food, and says, 'Eat this while I tell you my story'.... Another person could have narrated her story, but if that were the case, we would have missed hearing her passion for lighting and lettuce, her fears and excitement, and her gentle laugh." (AudioFile)