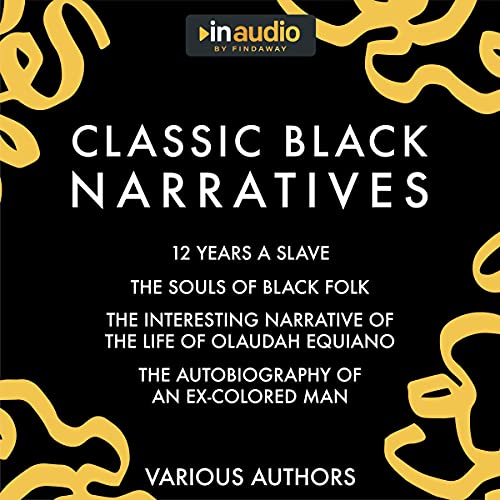 Witness powerful stories about the effects and realities of living in a prejudiced society in this audio bundle of classic Black narratives. These selections are both fictional and nonfictional stories of living in a society that devalues and dehumanizes the lives of Black people. Though all four of these books were written more than a hundred years ago, the realities within are still important for modern audiences to understand.

12 Years a Slave: This is the memoir account of Solomon Northup, a man born free in New York but who ended up sold into slavery in Louisiana. This account tells of his time working in plantations and his eventual escape from slavery.

The Souls of Black Folk: The Souls of Black Folk was published in 1903 as a collection of essays from W. E. B. Du Bois, an African American sociologist. This book is comprised of 14 essays, with Du Bois’ overall message being that Black people were equally worthy of the rights of White people.

The Interesting Narrative of the Life of Olaudah Equiano: This memoir is the story of a man born in Africa and sold into slavery as a young child. He was sold between several owners and sent around the world throughout his life, eventually working to purchase his own freedom.

The Autobiography of an Ex-Colored Man: This novel follows the life of an unnamed biracial man who lives his early life among Black communities but upon witnessing a horrific lynching decides to live as an “Ex-Colored Man” and pass himself off as White.