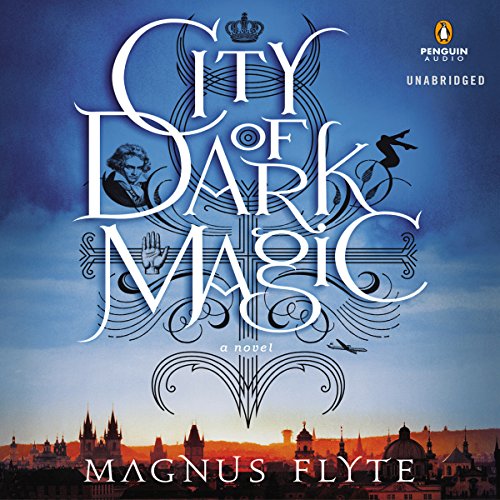 Cosmically fast-paced and wildly imaginative, this debut novel is a perfect potion of magic and suspense.

Once a city of enormous wealth and culture, Prague was home to emperors, alchemists, astronomers, and, as it’s whispered, hell portals. When music student Sarah Weston lands a summer job at Prague Castle cataloging Beethoven’s manuscripts, she has no idea how dangerous her life is about to become. Prague is a threshold, Sarah is warned, and it is steeped in blood.

Soon after Sarah arrives, strange things begin to happen. She learns that her mentor, who was working at the castle, may not have committed suicide after all. Could his cryptic notes be warnings? As Sarah parses his clues about Beethoven’s "Immortal Beloved", she manages to get arrested, to have tantric sex in a public fountain, and to discover a time-warping drug. She also catches the attention of a 400-year-old dwarf, the handsome Prince Max, and a powerful US senator with secrets she will do anything to hide.

City of Dark Magic could be called a rom-com paranormal suspense novel - or it could simply be called one of the most entertaining novels of the year.

“This deliciously madcap novel has it all: murder in Prague, time travel, a misanthropic Beethoven, tantric sex, and a dwarf with attitude. I salute you, Magnus Flyte!” (Conan O'Brien)

“The most wickedly enchanting novel I’ve ever read and also the funniest. A Champagne magnum of intrigue and wit, this book sparkles from beginning to end.” (Anne Fortier, bestselling author of Juliet)

“An entertaining mix of magic, mystery and romance, it’s one of the most original novels released this year.” (CNN.com)