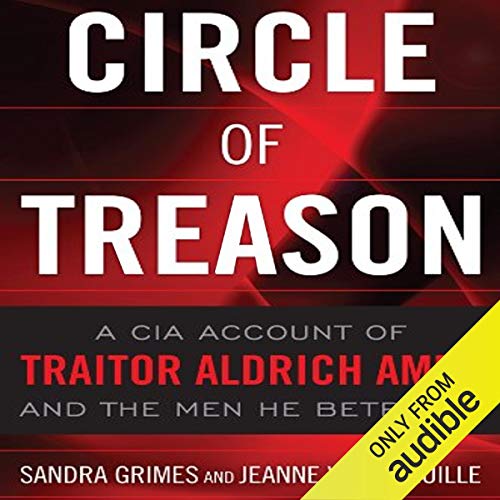 While there have been other books about Aldrich Ames, Circle of Treason is the first account written by CIA agents who were key members of the CIA team that conducted the intense "Ames Mole Hunt."

Sandra Grimes and Jeanne Vertefeuille were two of the five principals of the CIA team tasked with hunting one of their own and were directly responsible for identifying Ames as the mole, leading to his arrest and conviction.

One of the most destructive traitors in American history, CIA officer Aldrich Ames provided information to the Soviet Union that contributed to the deaths of at least ten Soviet intelligence officers who spied for the United States. In this book, the two CIA officers directly responsible for tracking down Ames chronicle their involvement in the hunt for a mole. Considering it their personal mission, Grimes and Vertefeuille dedicated themselves to identifying the traitor responsible for the execution or imprisonment of the Soviet agents with whom they worked.

Their efforts eventually led them to a long-time acquaintance and coworker in the CIA's Soviet-East European division and Counterintelligence Center, Aldrich Ames.

Not only is this the first book to be written by the CIA principals involved, but it is also the first to provide details of the operational contact with the agents Ames betrayed. The book covers the political aftermath of Ames's arrest, including the Congressional wrath for not identifying him sooner, the FBI/CIA debriefings following Ames's plea bargain, and a retrospective of Ames the person and Ames the spy. It is also the compelling story of two female agents, who overcame gender barriers and succeeded in bringing Ames to justice in a historically male-oriented organization.

Now retired from the CIA, Grimes and Vertefeuille are finally able to tell this inside story of the CIA's most notorious traitor and the men he betrayed.