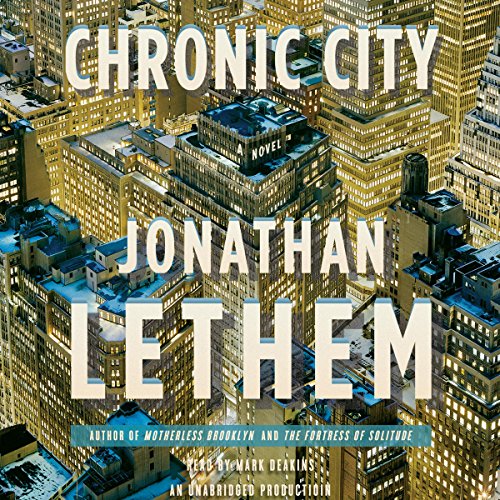 Jonathan Lethem's ambitious new book is a warped computer game, a Real Life alternate universe full of corridors and doorways that open up onto esoteric lore, secret histories, and quirky spins on reality  a warren where the narrative burrows down in increasingly irregular diversions. Its central concern is our perception of truth, and how that perception is molded by our obsession with celebrity, contemporary art, the obscure byways of the internet, and the hollowness at the heart of human relationships. Marauding tigers, meanwhile, bring chaos to the streets of Manhattan.

The central character is that ultimate has-been, the former child actor. He lives off residuals from an old TV show, and continues to act, in one way or another, as the celebrated fiancé of Janice Trumbull, a dying astronaut lost in space. Chase is locked into his own lonely orbit, a character written into the city's narrative as a recurring name in a slightly skewed but recognizable social scene. That is, until Perkus Tooth, a critic and conspiracy-theorist, enters his life, with his riffs on popular culture and obsession with  among many, many other things  transparent fetish objects called chauldrons.

Tooth is one of Mark Deakins' many memorable characterizations in this recording  he comes across as halfway between Bartleby the Scrivner and The Simpsons' Comic Book Guy. Deakins succeeds in painting each character with a light and unobtrusive touch, bringing life to characters that, on page, could easily appear as ciphers. Throughout Chronic City, reality is riddled through with simulation, and vice versa; Deakins' performance anchors the listener to some semblance of factuality, and makes us care enough to follow the narration through the shifting sands of authenticity. This is a universe where hacks and ghost writers create a "muppeteer's fiction", and it's thoroughly in keeping with Lethem's style that one of the more affecting parts of the book  Janice's letters back to Chase  turn out to be not quite what they seem. Nevertheless, Deakins delivers them without irony or ersatz sentimentality, and his integrity is of considerable benefit to the story.

Towards the end of Chronic City, Lethem's skill with language is finally matched with his control of the plot, and the two strands gel, bringing a sense of urgency to the quest for the real. Dafydd Phillips

The acclaimed author of Motherless Brooklyn and The Fortress of Solitude returns with a roar with this gorgeous, searing portrayal of Manhattanites wrapped in their own delusions, desires, and lies.

Chase Insteadman, a handsome, inoffensive fixture on Manhattan's social scene, lives off residuals earned as a child star on a beloved sitcom called Martyr & Pesty. Chase owes his current social cachet to an ongoing tragedy much covered in the tabloids: His teenage sweetheart and fiancée, Janice Trumbull, is trapped by a layer of low-orbit mines on the International Space Station, from which she sends him rapturous and heartbreaking love letters. Like Janice, Chase is adrift, she in Earth's stratosphere, he in a vague routine punctuated by Upper East Side dinner parties.

Into Chase's cloistered city enters Perkus Tooth, a wall-eyed free-range pop critic whose soaring conspiratorial riffs are fueled by high-grade marijuana, mammoth cheeseburgers, and a desperate ache for meaning. Perkus' countercultural savvy and voracious paranoia draw Chase into another Manhattan, where questions of what is real, what is fake, and who is complicit take on a life-shattering urgency. Along with Oona Laszlo, a self-loathing ghostwriter, and Richard Abneg, a hero of the Tompkins Square Park riot now working as a fixer for the billionaire mayor, Chase and Perkus attempt to unearth the answers to several mysteries that seem to offer that rarest of artifacts on an island where everything can be bought: Truth.

Like Manhattan itself, Jonathan Lethem's masterpiece is beautiful and tawdry, tragic and forgiving, devastating and antic, a stand-in for the whole world and a place utterly unique.

"Exquisitely written...Funny and mystifying, eminently quotable, resolutely difficult, even heartbreaking, Chronic City demonstrates an imaginative breadth not quite of this world." (Cleveland Plain Dealer)
"Astonishing....Knowing and exuberant, with beautiful drunken sentences that somehow manage to walk a straight line.....Turbocharged....Intricate and seamless....A dancing showgirl of a novel, yet beneath the gaudy makeup it's also the girl next door: a traditional bildungsroman with a strong moral compass." (New York Times Book Review)
"Exuberant literary revving.....Lethem's vision of New York can approach the Swiftian. It is impressively observant in its detail and scourging in its mocking satire. There are any number of wicked portraits....His comments on New York life are often achingly exact....So pungent and imaginative" (The Boston Globe)