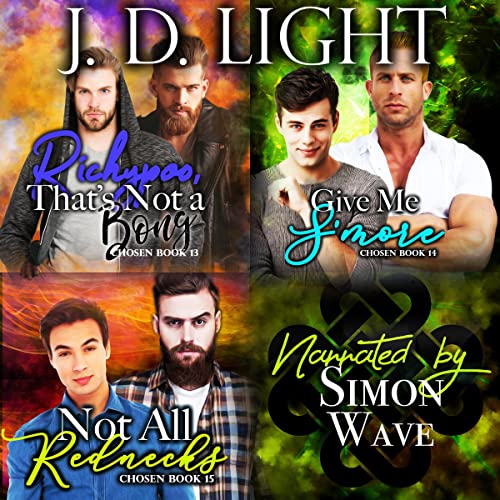 When a case takes me to Purdy, Nebraska, I learn about shifters, and I meet a man I can't get out of my head. But, I'm straight. At least, I think I am. I've never really been too passionate about anyone or anything. Being around Payne and the leap of shifters opens my eyes to the fact that I haven't really been living a life so much as just keeping my heart beating from day to day. Moving to Purdy and starting a new life that involves people and things I actually enjoy being around is my new life goal. But, that means moving.

Is it a good thing or an absolute disaster that Payne volunteers to tag along and help out?

Finding out my mother and father have been hiding a pretty important secret from my brother and sister and me isn't the highlight of my week. But, considering that up until yesterday I was being held in a dingy, freezing cell with no blanket, it's also not the worst thing. So, what if I can get pregnant and have amazing children that can possibly levitate or blow stuff up with their minds, I always knew I was pretty freaking extraordinary. Too bad I have a giant, massive, occasionally-can't-keep-from-stopping-in-the-middle-of-a-sentence-to-get-my-sh*t-together crush on the tank-in-a-tight-tee who rescued us from stinky balls and using a bucket as a bathroom. Because my nosy a** just overheard him telling somebody he already has a mate and apparently, they're effing perfect.

Not All Rednecks: Chosen, Book 15

I want what my brother has. Well, not exactly. As great as Carpenter is, he doesn't do it for me. But, I want the love, devotion, and crazy attraction he has with his mate. I want someone to look at me the way they look at each other. The way most of the leap looks at each other.

After a horrible relationship with a man who tended to like to hurt me and not in a good way, I just want to find that one man who will treat me like I'm something special and not something to be abused and left behind. Ever since I first saw Axel, I had hoped I could have that with the tiger shifter from Tennessee who is visiting the leap as a favor to his alpha. But, as drawn as I am to the man, he doesn't seem to have any interest in me. I guess I'm just not meant to be his after all.

Warning: Contains Mpreg elements! Also, my books have little to no angst, and lots and lots of fluff! They are better listened to in order, because I kind of write them like a continuation of a story, and I don't like to repeat explanations over and over if I can help it. No cheating, because that makes my heart hurt, and I try to avoid things that make me sad like I should be avoiding carbs. Sorry, I just don't want anyone being disappointed if they like the angst filled heart-rippers. These can be listened to more like a romantic comedy than a romantic drama.