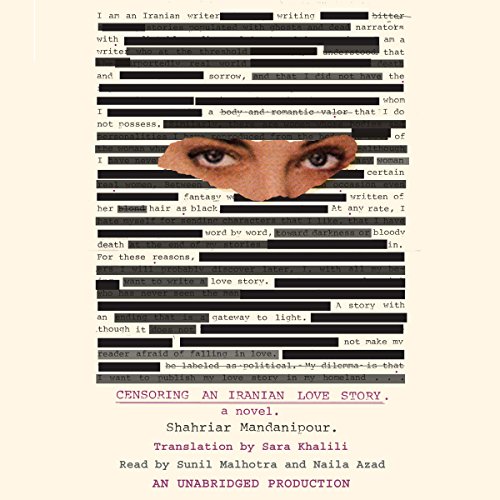 From one of Iran’s most acclaimed and controversial contemporary writers, his first novel to appear in English - a dazzlingly inventive work of fiction that opens a revelatory window onto what it’s like to live, to love, and to be an artist in today’s Iran.

The novel entwines two equally powerful narratives. A writer named Shahriar - the author’s fictional alter ego - has struggled for years against the all-powerful censor at the Ministry of Culture and Islamic Guidance. Now, on the threshold of 50, tired of writing dark and bitter stories, he has come to realize that the “world around us has enough death and destruction and sorrow". He sets out instead to write a bewitching love story, one set in present-day Iran. It may be his greatest challenge yet.

Beautiful black-haired Sara and fiercely proud Dara fall in love in the dusty stacks of the library, where they pass secret messages to each other encoded in the pages of their favorite books. But Iran’s Campaign Against Social Corruption forbids their being alone together. Defying the state and their disapproving parents, they meet in secret amid the bustling streets, Internet cafés, and lush private gardens of Tehran.

Yet writing freely of Sara and Dara’s encounters, their desires, would put Shahriar in as much peril as his lovers. Thus we read not just the scenes Shahriar has written but also the sentences and words he’s crossed out or merely imagined, knowing they can never be published.

Laced with surprising humor and irony, at once provocative and deeply moving, Censoring an Iranian Love Story takes us unforgettably to the heart of one of the world’s most alluring yet least understood cultures. It is an ingenious, wholly original novel - a literary tour de force that is a triumph of art and spirit.

"Kudos to Khalili for a wonderfully fluid translation of an intricately layered text." ( Publishers Weekly )