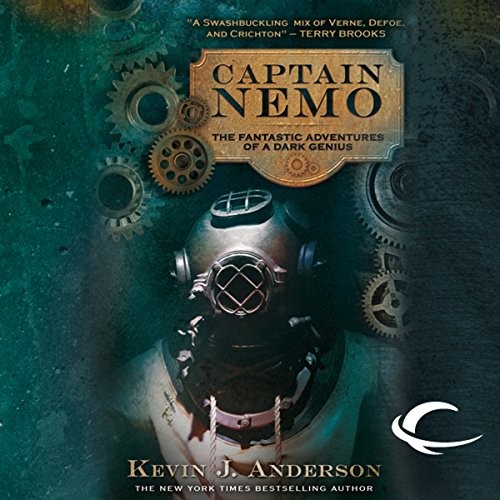 Captain Nemo is the fictional life story of one of Jules Verne's most memorable characters from 20,000 Leagues Under the Sea and The Mysterious Island. It covers his boyhood friendship with the dreamer Jules Verne, adventures aboard sailing ships, battles with pirates, and survival on a mysterious deserted island. Each time he returns home to his beloved France, Captain Nemo shares the tales of his exploits with the struggling writer Verne. We follow Nemo's exploration of hidden caverns that lead to the center of the earth, his travels across darkest Africa in a hydrogen balloon, and his imprisonment by an evil Ottoman caliph who commands the dark genius to construct a submarine boat, the Nautilus, in order to attack merchant ships that venture through the newly completed Suez Canal.

"Anderson's rollicking whopper of a novel glides along smoothly in a style deliberately modeled on Verne's own, yet unvexed by the scientific detail that often bogged down Verne's prose and muddied his narrative waters. Anderson's Nemo, whose stories alternate here with Verne's, is a sympathetically drawn Byronic hero, playing off the pedestrian Verne, a multitude of flamboyant pirates, Turkish caliphs, raging sea monsters and the incomparable Caroline, a proto-feminist shipping executive and composer. No one would miss the boat by signing on this fantastic journey." (Publishers Weekly)