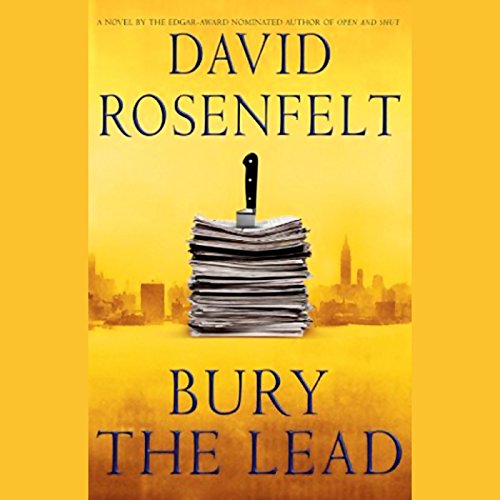 Northern New Jersey has a new local hero on its cultural crime turf. He's Andy Carpenter, the Paterson defense attorney who can sling a quip as fast as he can outmaneuver a snarling prosecutor. Acclaimed author David Rosenfelt's first novel was nominated for an Edgar Award. Now, in this new novel, the intrepid lawyer is thrust into the spotlight where he risks becoming a media victim...of the most fatal kind.

His streak of murder case acquittals made him a regular on cable talk shows. His recent $22 million inheritance bought him a dog rescue operation named the Tara Foundation after his own beloved golden retriever. Yet after turning down cases left and right, Andy Carpenter thinks he's facing a midlife crisis.

When a friend, a newspaper owner, calls in a favor and asks him to protect his star reporter, Andy is less than thrilled. His new client is Daniel Cummings, a journalist who is being used as a mouthpiece by a brutal serial killer. Things only get worse when Daniel is discovered near the body of the murderer's latest victim. And after Andy himself starts collecting anonymous death threats, he hears the news every defense lawyer dreads...and moves to within a dangerous keystroke of becoming tomorrow's obituary.

"A fun rollercoaster ride." ( Publishers Weekly)
"The real charm of this series lies in the wit of its affable narrator, who is not about to let an ongoing capital trial keep him from walking his beloved golden retriever, betting the point spread, or losing on the stock market. Add to this a likable supporting cast and a low-key love interest, and you have the legal-thriller genre's waggish rejoinder to Anthony Bruno and Janet Evanovich. A sure bet." ( Booklist)