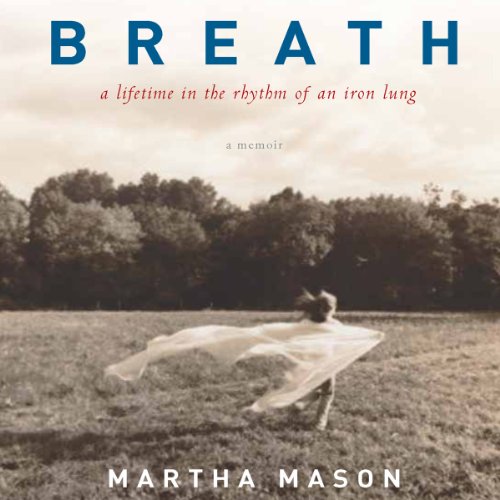 "I live with a stable of nightmares," Martha Mason writes, "but hope keeps them in harness."

Some might wonder how Martha could have clung to hope at all. In 1948, on the day of the funeral of her adored older brother, Gaston, a quick victim of the great polio epidemic, Martha was struck with the same dreaded disease.

After a year in polio hospitals, she was sent back to her home in the village of Lattimore in the cotton-growing hills of western North Carolina. She was completely paralyzed, with only her head protruding from an 800-pound yellow metal cylinder that breathed for her. Doctors told her parents that she likely wouldn't live for more than a year.

But the doctors hadn't counted on Martha's will, or the hope that drives her still.

An avid reader, she dreamed of being a writer, and after finishing high school in her iron lung, she went on to nearby Gardner-Webb College, then to Wake Forest University, where she was graduated first in her class and elected to Phi Beta Kappa.

After college, Martha attempted to begin a career as a writer, dictating to her mother, who had devoted her own life to Martha's care. But her father suffered a massive heart attack, leaving him, too, an invalid. Her mother, caring for both, had little time for Martha's dictation.

Technology revived Martha's dream. A voice-activated computer allowed her to write without assistance. She got it early in 1994 in a time of great despair. A devastating stroke had altered her mother's personality, causing her to turn on Martha, and eventually to revert to childhood. Martha had to become her mother's keeper, and to run a household from her iron lung.

To help her deal with the crisis, Martha began writing about her mother's selfless love. As she wrote, she found herself telling her own story, without self-pity or sentimentality, and with her usual courage, grace, and humor.

Breath will make readers laugh and cry, sometimes at the same time. It is a breathtaking memoir, a powerful testament to the human spirit, and it proves Martha Mason to be a writer whose voice is likely to be long remembered.