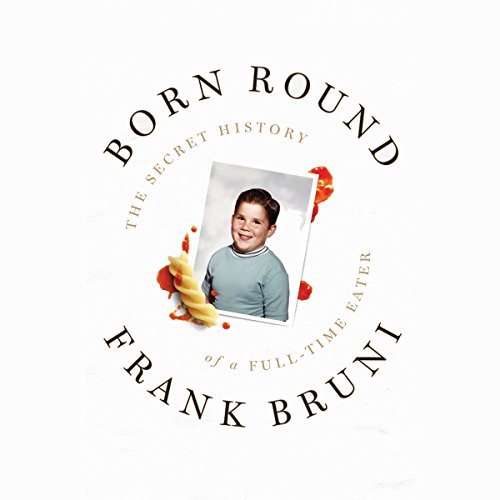 Frank Bruni, restaurant critic for The New York Times, loves food. But he also hates food, as it represents the root of his lifelong struggle with weight. And therein lies the dilemma. The delightfully funny and provocative memoir Born Round chronicles Bruni's relationship with food from infancy to adulthood, when he scored the renowned position at the Times. Born into an Italian family where eating was a major and constant event, Bruni can't recall a time when he wasn't worried about his appearance. From embarking on the Atkins diet with his mother at age 8 so he wouldn't be the chubby kid at school, to trying his hand at bulimia and the abuse of Ex-lax and Metamucil in college, Bruni recounts the numerous years of yo-yo dieting with absolute clarity and intimate detail.

Anyone who's ever had a few (or more) pounds to lose can relate to Bruni the author, but even more so because his voice as the narrator is so familiar. You feel as if a good friend is telling you his story and you're dying to hear more. Bruni's memoir is so honest and bare, it's hard to imagine anyone else narrating it. When Bruni recalls Thanksgiving memories with his family or his grandmother's favorite quote  "Born round, you don't die square."  his tone paints the picture of warmth and love.

No detail is too intimate, as Bruni illustrates his trials with dating (in one instance he keeps putting off a first date with a man he is very interested in, because he needs at least a week to lose five pounds before he is presentable), but his sense of humor keeps the narrative from being too heavy or depressing. Is Bruni the confident, aggressive, take-no-prisoners journalist that you would picture the infamous restaurant critic of The New York Times to be? No. He's a self-deprecating, insecure, sometimes-chubby-sometimes-not guy. And you love him all the more for it. Colleen Oakley

The New York Times restaurant critic's heartbreaking and hilarious account of how he learned to love food just enough after decades of struggling with his outsize appetite.

Frank Bruni was born round, round as in stout, chubby, and hungry, always and endlessly hungry. He grew up in a big, loud Italian family in White Plains, New York, where meals were epic, outsize affairs. At those meals, he demonstrated one of his foremost qualifications for his future career: an epic, outsize love of food. But Bruni's relationship with eating was tricky, and his difficulties with managing it began early. When Bruni was named the restaurant critic for The New York Times in 2004, he knew enough to be nervous.

The restaurant critic at the Times performs one of the most closely watched tasks in the epicurean universe; a bumpy ride was certain, especially for someone who had never written about food, someone who for years had been busy writing about politics, presidential campaigns, and the pope. What qualified him to be one of the most loved and hated tastemakers in the New York food world? Did his decades-long obsession with food suffice?

Food was his friend and enemy both, something he craved but feared, and his new-job jitters focused primarily on whether he'd finally made some sense of that relationship .In this coveted job, he'd face down his enemy at meal after indulgent meal. As his grandmother often put it, "Born round, you don't die square." Would he fall back into his old habits or could he establish a truce with the food on his plate?

Born Round traces the highly unusual path Bruni traveled to become a restaurant critic; it is the captivating account of an unpredictable journalistic ride from an intern's desk at Newsweek to a dream job at The New York Times, as well as the brutally honest story of Bruni's lifelong, often painful, struggle with food.