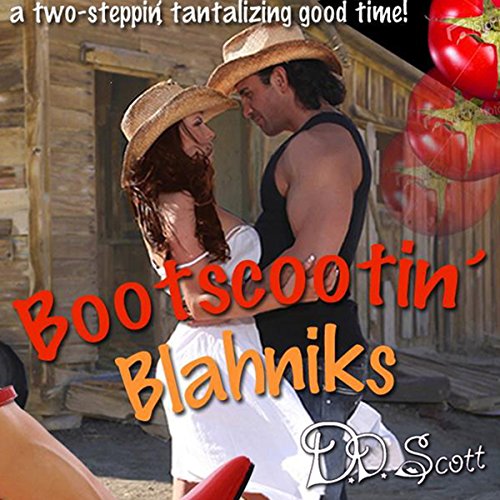 Manhattan apparel designer Roxy Rae Vaughn, who's also a still-in-the-closet, country line dancing queen, wants to be a fashion success story. Tired of being nothing more than a Fifth Avenue up-and-comer, thanks to her elitist parents, Roxy moves to Nashville, Tennessee and opens a boutique in a local tractor supply store, the only retail space she can afford. Short on cash and way, way down on luck, she rear-ends a pick-up truck belonging to a tomato-growin', bootscootin' cowboy who is anything but the perfect fit for her career plans, although he is her ideal dance partner. Can Roxy accept that her best fit is on the dance floor moving to her own style and her cowboy's lead?

Tomato farmer by day and bootscootin' instructor by night Zayne McDonald doesn't give a damn about winning Nashville's heirloom tomato contest, even though his late father did. Zayne wants to honor his father, but what he really wants is to line dance his way to a winner's spotlight. When he and Roxy are discovered by a huge dance show producer, Zayne learns it's partnering with Roxy that's his winning hybrid mix. That is, if he can keep her and the tomato contest away from Beefsteak Jack Baudlin, the toughest tomato man in CMT country.

About the author: D. D.Scott's bestselling romantic comedies are all about sexy, sassy, smart,career-driven women and the men who complete them. They're a bit chick lit witha gone-country twist and now a humorous mystery, comedic caper twist too. Her Bootscootin' Books - think Sex and The City meets UrbanCowboy - debuted August 2010, with BOOTSCOOTIN'BLAHNIKS, followed by STOMPIN'ON STETSONS and BUCKLESME BABY. Now, The Bootscootin' Characters are gettin' "cozy" as in Comedic Caper cozy, with the release of THUGGUARD and LIPGLOCK, Books One and Two of her new, Cozy Cash Mysteries, featuring allof your fave Bootscootin' characters plus tons of quirky new characters too.

She'sa two-time Amazon Movers & Shakers List Author (making it all the way to #2 on that prestigious list) and her books have been top picks - including one of the Top 10 Books for Mother's Day 2010 - for such superfab Blogs as ENT, Kindle NationDaily, Cheap e-Reads and Pixel of Ink. She has an active blog ofher own on her website at http://ddscottville.blogspot.com.

D. D.'s first twoshort stories - The Mom Squad Mini-Mayhem Mysteries - FLUIDFULFILLMENT and LICENSED FOR LOVE - released in October 2011, and a D.D. Scott Special Edition Ebook Boxed Set followed in December 2011. Her brand new series THE STUCK WITH A SERIES will release in early 2012, with STUCK WITH A SCHMUCK and STUCK WITH A STIFF, along with atotal of 14 additional releases throughout 2012.