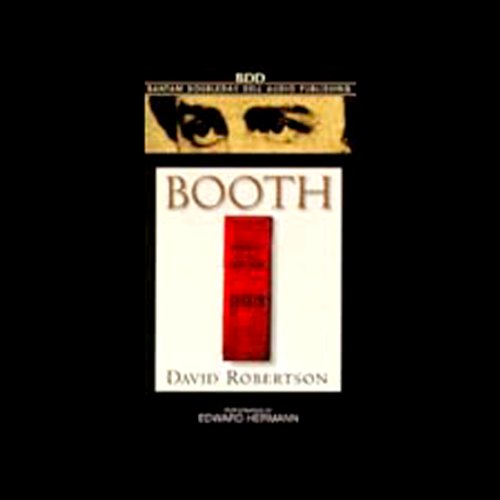 A gripping historical novel set amidst the confusion and chaos of the Civil War, Booth is the story of the only conspirator in the plot to assassinate Abraham Lincoln who was not killed or executed - a young man who falls under the spell of the charismatic and captivating world-famous stage actor, and is gradually sucked into the vortex of Booth's insidious plans.

The novel opens in 1916, the last year of narrator John Surratt's life. Surratt, who has spent the years since Lincoln's death as an obscure shipping clerk, is approached by D.W. Griffith to read from his Civil War diary in Griffith's movie Birth of a Nation. As Surratt reads over his diary for the first time in 50 years, the listener returns to the tumultuous days of 1864, and a chance encounter between Surratt and John Wilkes Booth.

Booth, a larger-than-life personality whose appetites, fame, and sheer force of will bedazzle everyone around him, helps to secure Surratt a position as the assistant to renowned photographer Alexander Gardner.

Over the following weeks, Booth continues to lavish attention on Surratt, slowly drawing him bit by bit into his web of intrigue. By the time Surratt discovers the desperate nature of Booth's true intentions, it is too late, and he finds himself caught up in a firestorm of violence that shatters forever his insulated life and mild ambitions.

Based on the actual historical record of the plot to kill Lincoln, and illustrated with photographs of the conspirators and their execution, the novel is filled with the kind of detail of 19th century architecture, photography, and day-to-day bustle that brings Civil War Washington vividly to life.

A powerful evocation of a dangerous, chaotic, and tragic time, Booth is the compulsively readable story of the most infamous assassination in our history, as well as a riveting portrait of an enigmatic figure who continues to haunt the American imagination.

Booth is a selection of both the Barnes and Noble "Discover Great New Writers" program and Borders' "Discover" program.