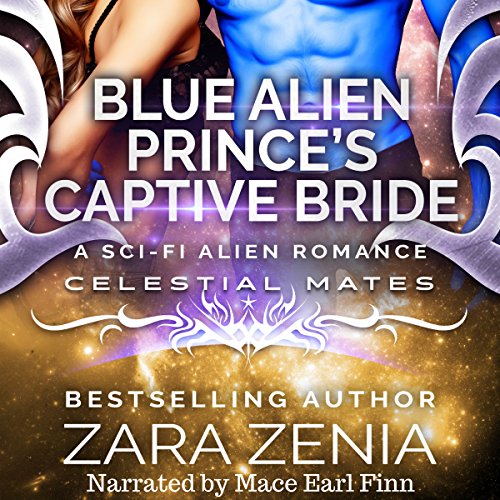 An alien prince with one mission: to find a bride and have children to save his family legacy. Marissa is ready to meet the man of her dreams.

The shy librarian hasn’t had much luck in love, so when her best friend suggests she sign up for Celestial Mates, she decides - why not?

Unfortunately, they neglected to mention she’d have to take a space ship to her first date. Obviously there’s been a huge mistake.

Kadic, the alarmingly sexy dark-blue alien prince from the planet Alpazon, can’t possibly expect to marry her. They don’t even have the same… the same… parts.

But under a midnight sky filled with two moons and a million twinkling stars, the seductive alien’s naughty tongue holds her captive in a haze of ecstasy, and makes her question whether or not she’s ready to leave everything she’s ever known to join his alien world.

Prince Kadic needs a mate. If he doesn’t have children before his parents pass away, his tyrant older brother will ascend to the throne and will destroy their family legacy. Desperate to be married, he contacts Celestial Mates who assures him they will send a suitable bride. He’s more than impressed by Marissa’s sensual curves and innocent smile.

But when she instantly rejects him, he confines her to the palace. Will he be able to convince her of his love and devotion? Or is he risking planetary annihilation at the hands of his brother?

Blue Alien Prince’s Captive Bride is part of the Royally Blue - Celestial Mates series and is a full-length science fiction romance novel. There are NO cliffhangers, NO cheating, and a guaranteed happy ending!