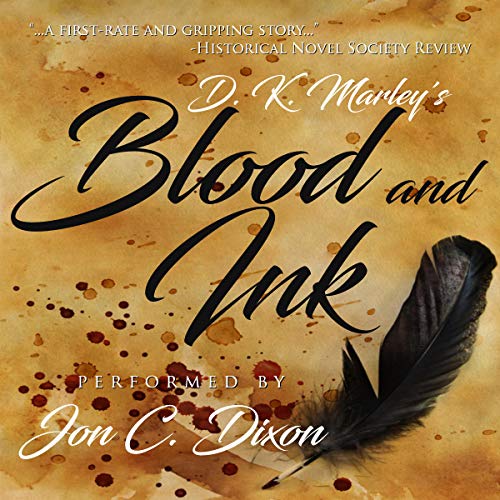 In the tradition of The Marlowe Papers by Ros Barber, the debut historical fiction novel Blood and Ink tells the story of Christopher (Kit) Marlowe, the dark and brooding playwright of Queen Elizabeth's court. Marlowe sells his soul to gain the one thing he desires: to see his name immortalized.

Inspired at an early age on the banks of the Stour River, his passion for a goose quill and ink thrusts him into the labyrinth of England's underworld - a secret spy ring created by the Queen's spymaster, Sir Frances Walsingham. Kit suffers the whips and scorns of time as he witnesses the massacre of Paris, the hypocrisy of the church, the rejection from his 'dark lady', the theft of his identity as a playwright, and wrenching loss breathing life into many of his unforgettable characters.

As he sinks further into the clutches of Walsingham, a masque is written by his own hand to save his life from shadowing betrayers, from the Queen's own Star Chamber, and from the Jesuit assassins of Rome, thus sending him into exile and allowing an unknown actor from Stratford-upon-Avon, William Shakespeare, to step into his shoes. And so begins the lie; and yet, what will a man not do to regain his name?

The book is fabulous. Really loved DK Marley's language and paired together with Jon C Dixon's performance, this was a great, great listening experience. So good that I've hired him to perform one of my own books! If you want a novel about Shakespeare and Marlowe, look no further. This is so beautifully plotted, the cast of characters really memorable, and the audiobook experience will leave you feeling as if you've watched and lived it all. I only felt the ending was much too long. There was nothing more to resolve and the sad demise of their lives was something I could have been spared.