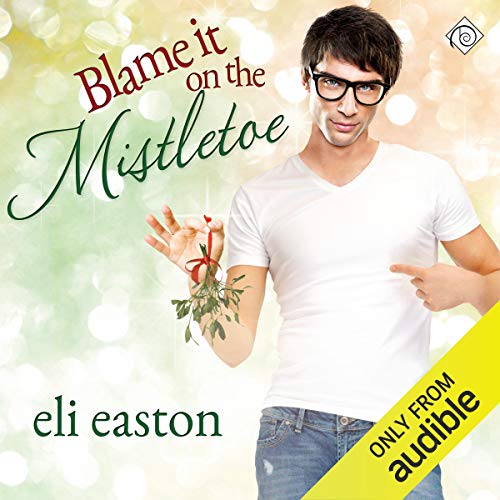 Blame It on the Mistletoe

When physics grad student Fielding Monroe and skirt-chaser and football player Mick Colman become college housemates, they're both in for a whole new education. Mick looks out for the absent-minded genius, and he helps Fielding clean up his appearance and discover all the silly pleasures his strict upbringing as a child prodigy denied him. They become best friends.

It's all well and good until they run into a cheerleader who calls Mick the "best kisser on campus". Fielding has never been kissed, and he decides Mick and only Mick can teach him how it's done. After all, the physics department's Christmas party is coming up with its dreaded mistletoe. Fielding wants to impress his peers and look cool for once in his life. The thing about Fielding is, once he locks onto an idea, it's almost impossible to get him to change his mind. And he just doesn't understand why his straight best friend would have a problem providing a little demonstration.

Mick knows kissing is a dangerous game. If he gives in, it would take a miracle for the thing not to turn into a disaster. Then again, if the kissing lessons get out of hand, they can always blame it on the mistletoe.

Das sagen andere Hörer zu Blame It on the Mistletoe

It's a tricky thing when it comes to audiobooks.A good book can easily be ruined when the audiobook narration is a bore. Been there, done that. It sucks and I always felt bad for the author afterwards.On the other hand, a mediocre book can gain a lot from an outstanding performance from the narrator. I had those moments too. Which made me ditch the author and his/her books but fall in love with the narrator.And just once in a while, on a magic Sunday morning when you least expect it, you get the full package. It all comes magically together: you start a fantastic book AND get a breathtaking narration. And this is what happened here.The narrator Jason Frazier took my breath away in the very first 10 seconds! I had to start the audiobook over again for at least 5 times because I couldn't believe what I was hearing. I was listening to a sexy voice who didn't just narrate a story, no I got a full-on performance. I was immediately mesmerized and I hardly couldn't focus on the story.When I was done, I felt sorry for all the other narrator's out there, because Jason Frazier has set such a high standard with this narration that I doubt that anyone will be able to outdo him in any time soon.He became my own personal "voice hunk" since and I can't urge any author out there enough to seriously consider him when it comes to choose a narrator for your books!Highly, HIGHLY recommend!PS: The book was great too.