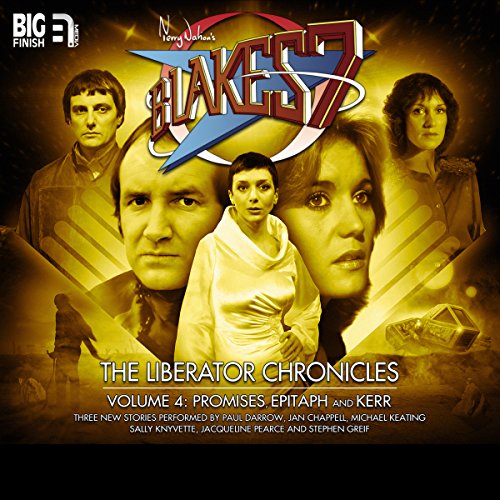 Three enhanced audiobooks performed by the stars of the classic BBC television series. These stories are set during series one.

'Promises' by Nigel Fairs. Starring Jan Chappell as Cally and Stephen Greif as Travis. Cally is alone with Travis, Blake's mortal enemy. As they delve into the past, a long-hidden secret that links them both is revealed.

'Epitaph' by Scott Harrison. Starring Sally Knyvette as Jenna and Michael Keating as Vila. When Jenna and Vila answer a distress call from a ship, a journey begins that will lead them to the surviving members of Jenna's family.

'Kerr' by Nick Wallace. Starring Jacqueline Pearce as Servalan and Paul Darrow as Kerr. Supreme Commander Servalan believes she has a vital insight into the Liberator crew - a clone of Avon. But can this clone be trusted?