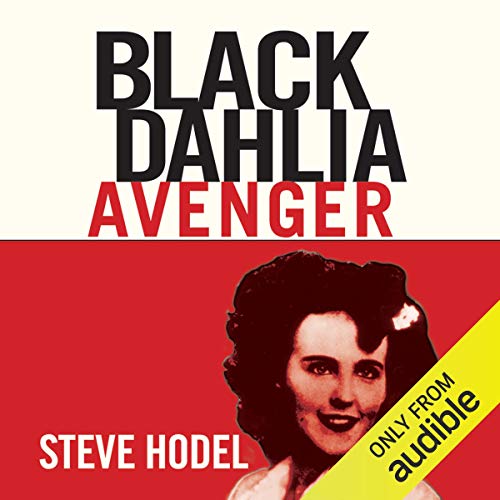 The 1947 murder of Elizabeth Short led to an exhaustive and fruitless manhunt in Southern California, and the Black Dahlia case still stands as one of the most famous unsolved murders in American history. Retired LAPD detective Steve Hodel, however, has uncovered evidence that may reveal the mysterious killer's identity: his father George.

Kevin Pierce gives a striking edge to Black Dahlia Avenger, evoking the no-nonsense style of classic LA noirs like Double Indemnity and Sunset Boulevard. But Hodel's work is all too real, even as the gory and byzantine details of this riveting case seem like a Hollywood tall tale.

For 56 years, the Black Dahlia murder case remained one of the most notorious and high-profile unsolved crimes of the 20th century. Now, Steve Hodel, a 24-year veteran of the Los Angeles Police Department, believes he has finally solved the case. On January 15, 1947, 22-year-old Elizabeth Short - "The Black Dahlia" - was found dead in a vacant lot in Los Angeles, her body horribly mutilated, bisected at the waist, and posed in a bizarre manner. The horrific crime shocked the country and commanded headlines for months as the killer taunted the police with notes and phone calls. Despite the massive manhunt, the murderer was never found.

Hodel began working on the case after he retired from the LAPD when he chanced upon an intriguing piece of evidence that led him on a trail that he had no choice but to follow - since it pertained directly to him. As he dug deeper, he came to believe that the killer was also responsible for over a dozen other unsolved murders in the Los Angeles area around the same time. He also found copious evidence of corruption at the LAPD, leading him to accuse the department top brass of covering up the Black Dahlia murder in order to conceal a deeper conspiracy involving crooked politicians and gangsters.

Despite a lack of physical evidence (which had been destroyed), Hodel is able to connect numerous dots and make a plausible case, complete with lurid tales of wild orgies that were attended by celebrities such as the artist Man Ray, the director John Huston, and a host of other Hollywood elites. He also discloses his killer’s obsession with the Marquis de Sade and Jack the Ripper and how he modeled his own crimes on their behavior. In particular, there is a disturbing connection between the work of Man Ray and the horrific circumstances of Short’s murder. It is doubtful that this will be the final word on the Black Dahlia murder - too much myth surrounds it and much of his evidence is circumstantial - but Hodel’s labyrinthine tale adds much to this intriguing case.