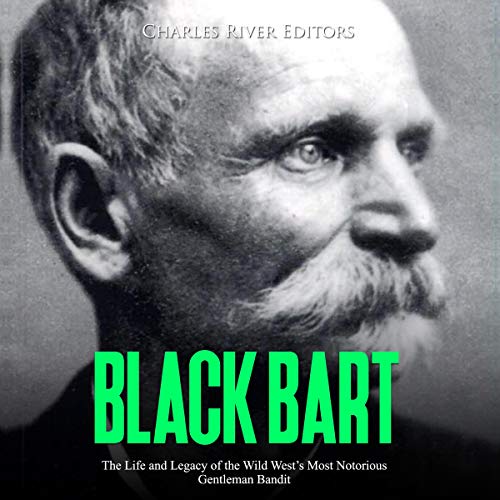 Black Bart: The Life and Legacy of the Wild West’s Most Notorious Gentleman Bandit

Black Bart: The Life and Legacy of the Wild West’s Most Notorious Gentleman Bandit

“Here I lay me down to sleep

To wait the coming morrow,

Let come what will, I'll try it on,

My condition can't be worse;

And if there's money in that box

Few things have captured the American imagination like the “Wild West,” which still evokes images of dusty cowboys, outlaws, gunfights, gamblers, and barroom brawls over 100 years after the West was settled. A constant fixture in American pop culture, the 19th century American West continues to be vividly and colorfully portrayed not just as a place but as a state of mind. Even among late 19th century contemporaries, the growth of print journalism fed the East Coast’s interest in the West, whether it was based on fantasy and non-fiction, and their works made celebrities out of individuals on both sides of the law. Thus, for every Wyatt Earp that became synonymous with gun-toting lawmen, there were outlaws like Billy the Kid and others who straddled the line, like Wild Bill Hickok.

There was no shortage of targets for thieves in the West, and some infamous criminals struck dozens of times. Billy the Kid was rumored to be responsible for 21 deaths, and Jesse James was involved in holding up at least 19 banks, trains, and stagecoaches with his vicious gang, resulting in the deaths of some 20 men. The Sam Bass Gang, captained by another hot-tempered gunslinger and seasoned bandit who terrorized the Midwest, as well as the Lone Star State, carried out what is now remembered as the largest heist in the history of the Union Pacific Railroad, fleeing with $65,000 in gold coin and valuables (equivalent to approximately $1.5 million today). Few could compare to the frightening Felipe Espinosa, the Mexican-American outlaw who killed 32 men in the Colorado Territory in the summer of 1863 alone.

Among the outlaws who were known for their gun skills and crimes, a criminal of an entirely different breed emerged - the gentleman bandit. Of them, the most famous is Charles E. Boles, more commonly known by his legendary sobriquet, “Black Bart.” Black Bart reportedly committed at least 28 stagecoach robberies in a span of eight years, but his name never evoked fear or hatred; instead, he was widely respected and even somewhat admired in both criminal and civilian circles. He was, in many ways, unlike any other desperado the Wild West had ever seen, famed for his debonair appearance, his twisted, yet almost commendable sense of morality, and the way he pulled off his crimes, rounded out by his signature calling card, which came in the form of self-penned, poignant poems left behind at crime scenes. In many ways, later outlaws who were in a sense glamorized by the public in the early 20th century, such as Bonnie and Clyde, owed their reputations to the path Black Bart blazed over the course of his criminal career.

Black Bart: The Life and Legacy of the Wild West’s Most Notorious Gentleman Bandit chronicles the colorful and controversial life of one of the West’s most unique outlaws. Along with pictures depicting important people, places, and events, you will learn about Black Bart like never before.