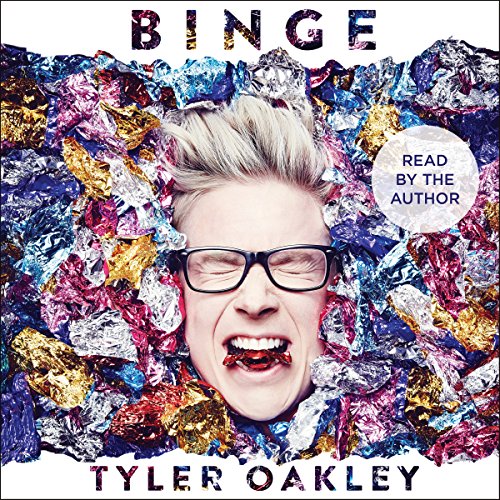 Pop culture phenomenon, social rights advocate, and the most prominent LGBTQ+ voice on YouTube, Tyler Oakley brings you his first collection of witty, personal, and hilarious essays written in the voice that's earned him more than 21 million followers across social media.

For someone who made a career out of oversharing on the Internet, Tyler Oakley has a shocking number of personal mishaps and shenanigans to reveal in his first book: He experienced a legitimate rage blackout in a Cheesecake Factory; he had a fashion stand-off with the White House Secret Service; he crashed a car in front of his entire high school in an Arby's uniform; he projectile vomited while bartering with a grandmother. With millions of fans clamoring for more Tyler Oakley, he delivers his best untold, hilariously side-splitting moments with trademark flair in Binge.

I enjoyed this so much. I literally cried sad and happy tears. Great book Tyler!Proud of you!
@kasandra1307

I loved the extra comments that were in the audiobook - descriptions of pictures, short asides... All of it!

Wow, thanks for sharing the good, the bad and the dirty. That book made me laugh, cry and gave me a lot to think about.
Absolutely loved it.

sooo good. thanks for sharing.

i've never read, or listened to, any book like this, but i think it really taught me some things, so thanks to tyler oakley for sharing so much of his personal life with the world.

First of all: Congrats Tyler on creating something so amazing!

I finished listening to Binge in less than 3 days and loved every second. It was sincere, funny and a whole new side of you. And by you, I mean the real you, Matthew Tyler Oakley, and not @tyleroakley, as you described it.
And honestly in the beginning I was sceptical but now I have to say: Matthew Tyler Oakley seems like a guy I would want to hang out with. He seems like a funny, relatable and just over all nice guy.
Binge did an amazing job at introducing me to this guy much rather than telling stories that @tyleroakley experienced. And that was the best thing about this book. I bought it because I wanted to know more about the man behind the brand and now I feel like I know you a little better.
So thank you for writing Binge and good luck woth whatever comes next!

I really loved the audio book and will probably listen to it a second time soon, and maybe a few more times !! x

Everyone who likes Tyler Oakley even the slightest bit will like this audiobook!
I definitely love it!!!