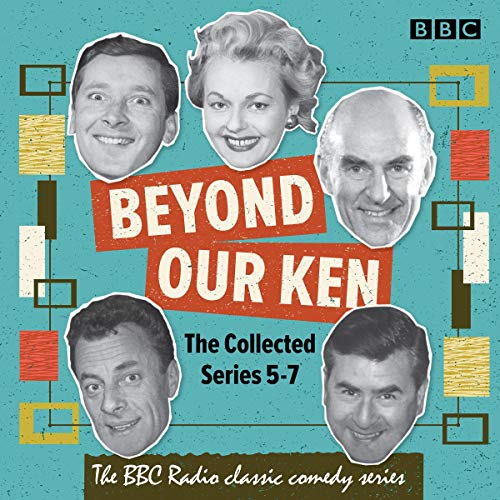 Beyond Our Ken: The Collected Series 5-7

The complete series 5-7 of the legendary BBC radio comedy.

One of the funniest and most popular series on radio between 1958 and 1964, Beyond Our Ken delighted audiences nationwide throughout its seven series and 123 episodes. Packed with sketches, songs, catchphrases and innuendo, it mixes silliness, satire and sophistication to superb effect, and continues to make us laugh today.

Kenneth Horne - 'who prefers to remain anonymous' - is our unflappable host in these 46 episodes, presiding over an array of fabulous characters such as camp duo Charles and Rodney, celebrity chef Fanny Haddock and countryman Arthur Fallowfield (for whom the answer always lies in the soil, regardless of the question).

Regular documentary spoof 'Hornerama' returns, with a look at topics including the arts, the countryside, travel and television; and Kenneth Horne's weeks become increasingly extraordinary and eventful. Plus, the team tackle the Siege of Troy, present a new interpretation of 'Horne In Wonderland' (or 'Beyond Our Looking Glass'), offer their take on Caesar and Cleopatra's story and revel in a Regency romp through Beau Brummel's Brighton. Accompanying them for some musical interludes are Jill Day, Edwin Braden, the Fraser Hayes Four, Eileen Gourlay and the BBC Variety Orchestra.

First broadcast on BBC Light Programme on the following dates:

These episodes have been restored to their fullest versions using both Home (BBC Light Programme) and Overseas (BBC Transcription Service) recordings. Whilst every attempt has been made to clean up and remaster these recordings using the latest technology, the sound quality may at times reflect the age and off-air nature of certain source material.

Episodes restored and remastered by Ted Kendall and Keith Wickham.