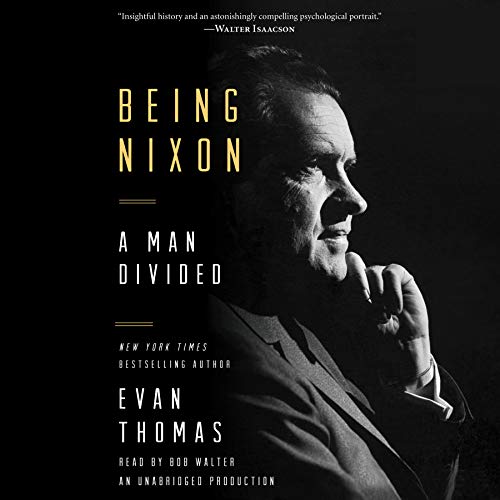 The landmark New York Times best-selling biography of Richard M. Nixon, a political savant whose gaping character flaws would drive him from the presidency and forever taint his legacy.

“A biography of eloquence and breadth... No single volume about Nixon’s long and interesting life could be so comprehensive.” (Chicago Tribune)

One of Time’s Top 10 Nonfiction Books of the Year

In this revelatory biography, Evan Thomas delivers a radical, unique portrait of America’s 37th president, Richard Nixon, a contradictory figure who was both determinedly optimistic and tragically flawed. One of the principal architects of the modern Republican Party and its “silent majority” of disaffected whites and conservative ex-Dixiecrats, Nixon was also deemed a liberal in some quarters for his efforts to desegregate Southern schools, create the Environmental Protection Agency, and end the draft.

The son of devout Quakers, Richard Nixon (not unlike his rival John F. Kennedy) grew up in the shadow of an older, favored brother and thrived on conflict and opposition. Through high school and college, in the navy and in politics, Nixon was constantly leading crusades and fighting off enemies real and imagined. He possessed the plainspoken eloquence to reduce American television audiences to tears with his career-saving “Checkers” speech; meanwhile, Nixon’s darker half hatched schemes designed to take down his political foes, earning him the notorious nickname “Tricky Dick.” Drawing on a wide range of historical accounts, Thomas’ biography reveals the contradictions of a leader whose vision and foresight led him to achieve détente with the Soviet Union and reestablish relations with communist China, but whose underhanded political tactics tainted his reputation long before the Watergate scandal.

A deeply insightful character study as well as a brilliant political biography, Being Nixon offers a surprising look at a man capable of great bravery and extraordinary deviousness - a balanced portrait of a president too often reduced to caricature.

Praise for Being Nixon

“Thomas has a fine eye for the telling quote and the funny vignette, and his style is eminently readable.” (The New York Times Book Review)

“A biography of eloquence and breadth... No single volume about Nixon’s long and interesting life could be so comprehensive.” (Chicago Tribune)

“How self-aware are the great men of history? That’s the fascinating question at the heart of Evan Thomas’s new book on Richard Nixon.... Here in one sharp and briskly written volume is what you really want to know about the great and horrible thirty-seventh President: How could someone so wise about the world be so utterly clueless about himself?... [Nixon] is revealed in Thomas’s hands as awkward, striving, victimized and alone - strange habits for a man who opted for such a public life, and traits that carried the seeds of his destruction.” (Time)

“Ambitious... Thomas’s book is filled with anecdotes that humanize Nixon. There are pages suggesting real insight and, especially, how the president was seen by those around him.... There are well-crafted word-pictures of Nixon throughout the narrative, from his legendary awkwardness to his catastrophic frustration and vindictive rage.” (Carl Bernstein, The Washington Post)