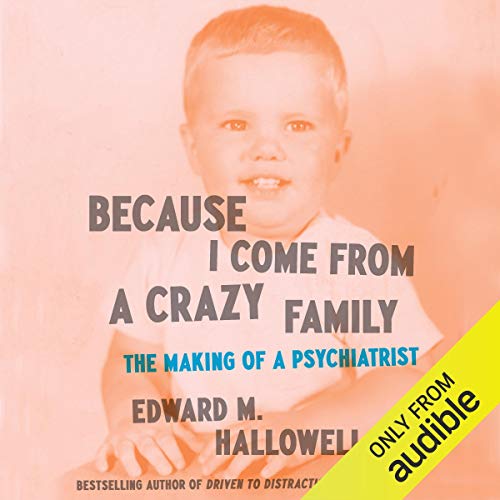 Because I Come from a Crazy Family

From the best-selling author of the classic book on ADD Driven to Distraction, a memoir of the strange upbringing that shaped Dr. Edward M. Hallowell's celebrated career.

When Edward M. Hallowell was 11, a voice out of nowhere told him he should become a psychiatrist. A mental health professional of the time would have called this psychosis. But young Edward (Ned) took it in stride, despite not quite knowing what "psychiatrist" meant. With a psychotic father, an alcoholic mother, an abusive stepfather, and two so-called learning disabilities of his own, Ned was accustomed to unpredictable behaviour from those around him and to a mind he felt he couldn't always control.

The voice turned out to be right. Now, decades later, Hallowell is a leading expert on attention disorders and the author of 20 books, including Driven to Distraction, the work that introduced ADD to the world. In Because I Come from a Crazy Family, he tells the often strange story of a childhood marked by what he calls the "WASP triad" of alcoholism, mental illness, and politeness and explores the wild wish, surging beneath his incredible ambition, that he could have saved his own family of drunk, crazy, and well-intentioned eccentrics - and himself.

Because I Come from a Crazy Family is an affecting, at times harrowing, ultimately moving memoir about crazy families and where they can lead, about being called to the mental health profession and about the unending joys and challenges that come with helping people celebrate who they are.