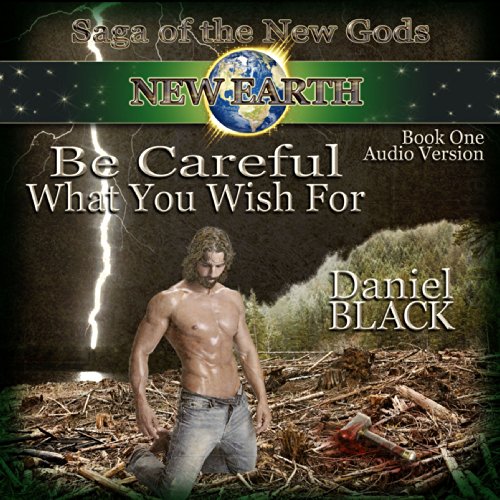 Be Careful What You Wish For (Saga of the New Gods)

The time has come, Hells gates shall be thrown wide and the power of creation shall run rampant upon the earth.

In this, the first audiobook of the Saga of the New Gods, a group of young college students bring about Armageddon in the most literal sense of the word. With a simple wish upon a unique wedding band given to him by his love, Michelle, Adam unleashes a power that could - if left to reign unchecked - destroy the entire world…

The story begins with a couple of young women, Chelsea and Michelle, bearers of a tragic past, fighting to create a future for themselves. They travel to an old pawn shop in the town of Athens, Ohio, and purchase a ring for Michelle to give to her love, Adam, in the hopes of becoming his wife. A poorly timed wish after the gift of the ring has dire consequences however, as magic enters the world. All that they know, or have known, begins to come unraveled as first their comfortable existence in this bucolic town is ripped from them, then their future. They reach their moment of greatest despair as one of their number flees, another lays near death, and another sleeps in a state akin to a coma…In this moment of vulnerability a man arrives offering a glimmer of hope, Mathew Banks, a federal officer, arrives with the dawn to take them to a place of safety and security. But what is secure when the very laws that govern reality begin to unravel? What is safe when those who watch over you risk change from day to day, moment to moment, and even those who are your closest friends deceive you and risk more than your lives, but the very souls that make you who you are?

This first story tells the tale of the creation of this new world, as the series continues you will rise to the heights of this world and others, and to the very depths of hell.