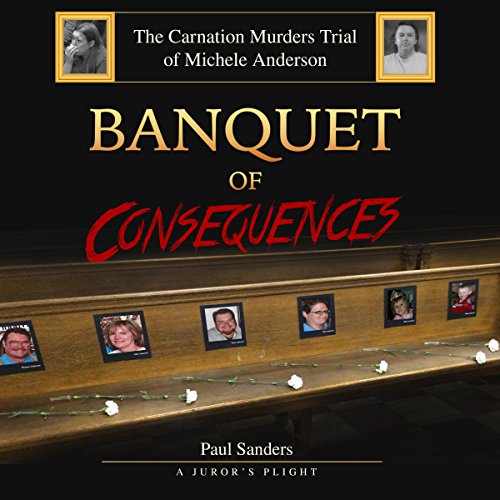 Banquet of Consequences: A Juror's Plight

On Christmas Eve 2007, Judy and Wayne Anderson's daughter, Michele, and her boyfriend, Joseph McEnroe, arrived at their home for a family meal.

Unbeknownst to them, their daughter was armed with a loaded 9 mm pistol, and McEnroe was carrying a .357 Magnum. Both parents were callously shot dead by the pair, and their bodies were hidden from view.

Two and a half hours later, Michele's brother, Scott, his wife, Erica, and their two children, Olivia (5) and Nathan (3), arrived at the house. Within the hour they, too, had been pitilessly slain in an act of violence that was breathtaking in its scope and cruelty.

With his highly anticipated third audiobook, Paul Sanders takes the listener inside every day of the trial of Michele Anderson, with his customary attention to detail, from December 2015 until March 2016.

And in a unique digression from his other works, Sanders includes something he has never done before: an interview with one of the killers, Joseph McEnroe, at Walla Walla Penitentiary.

Banquet of Consequences is the first of two books on what came to be known as the Carnation murders. Were the killings a premeditated act, or had the defendants acted in self-defense? And what of the deaths of Olivia and Nathan? Who shot them and why? It would not be an easy task for a jury to decide.