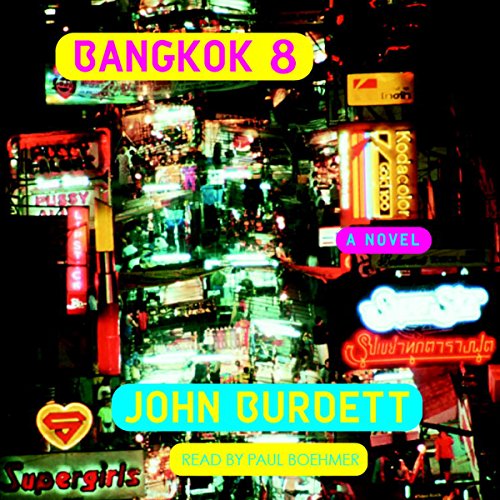 A thriller with attitude to spare, Bangkok 8 is a sexy, razor-edged, often darkly hilarious novel set in one of the world’s most exotic cities.

Witnessed by a throng of gaping spectators, a charismatic Marine sergeant is murdered under a Bangkok bridge inside a bolted-shut Mercedes Benz. Among the witnesses are the only two cops in the city not on the take, but within moments one is murdered and his partner, Sonchai Jitpleecheep - a devout Buddhist and the son of a Thai bar girl and a long-gone Vietnam War G.I. - is hell-bent on wreaking revenge.

On a vigilante mission to capture his partner’s murderer, Sonchai is begrudgingly paired with a beautiful FBI agent named Jones and captures her heart in the process. In a city fueled by illicit drugs and infinite corruption, prostitution and priceless art, Sonchai’s quest for vengeance takes him into a world much more sinister than he could have ever imagined.

“A tour de force.... Burdett is purely and simply a wonderful writer.” (The Washington Post)

"Bangkok 8 is one of the most startling and provocative mysteries that I've read in years. The characters are marvelously unique, the setting is intoxicating and the plot unwinds in dark illusory strands, reminiscent of Gorky Park. Once I started, I didn't want to put it down." (Carl Hiaasen)

“The wildest ride in modern crime novel exoticum. A novel so steeped in milieu that it feels as if you’ve blasted to mars in the grip of a demon who won’t let you go. Read this book, savor the language - it’s the last and the most compelling word in thrillers.” (James Ellroy)

To deal with the reading first - pretty good. The story itself takes some perseverance to begin with, but its's worth keeping going. Once you get past the Buddhist flapdoodle (I'm an admirer of Buddhism, but I'm not sure how the teachings of the Buddha fit into a crime novel) and the sociological stuff on the practice of the oldest profession in Thailand, the story and the setting are so unusual that you keep going right until the (ambiguous) end.