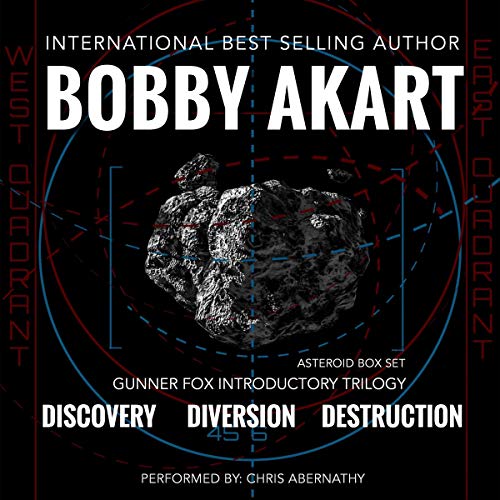 Offered for the first time as a box set, this number one best-selling trilogy from Bobby Akart, one of America's favorite storytellers, has delivered up-all-night thrillers to readers in 245 countries and territories worldwide.

In Asteroid Discovery, Gunner Fox finds himself in a place of darkness, without a reason to live.

Until now. An asteroid is on a collision course with our planet.

Gunner Fox is on a collision course with death.

Asteroid Discovery introduces Gunner Fox, a United States Air Force Test Pilot and Earth Scientist who's suffering the loss of his wife, Astronaut Heather Fox. He finds himself alone in a place of darkness, pushing the limits of life, daring it to take him.

In a time of desperation NASA needs the most fearless fighter pilot for a life or death mission. They need Gunner Fox. Can they convince the man who blames them for taking his wife, help them divert the asteroid hurtling to earth and avoid another extinction level event?

When you have nothing to lose, you have everything to gain.

Space is far from empty.

It's full of debris...wandering nomads seeking a target.

Including Asteroid IM86, large enough to destroy us all.

When the world needs a hero, they turn to Gunner Fox who will move Heaven to save Earth.

Asteroid Diversion places Gunner Fox on a collision course with a planet killing asteroid. Time is running out as asteroid 2029 IM86 is hurtling toward Earth. NASA needs their most fearless combat pilot for a life or death mission. They need Gunner Fox.

Can he succeed in saving Earth? The odds are stacked against him and an unexpected foe threatens to derail the whole mission.

The fate of the the planet rests in the hands of Gunner Fox while the weight of the world rests on his shoulders. Can he move Heaven to save Earth, or will he die trying?

The trilogy concludes as Heaven and Earth collide in Asteroid Destruction.

The planet was spared an extinction level event, but that doesn't mean everyone survived. While the world is preparing for the onslaught of the asteroid's remnants, the Starhopper and its international crew of eight, including US Air Force Major Gunner Fox are missing. Some want to keep it that way.

"Day by day. Minute by minute. Ride or die. We stick together".

Major Cameron Mills and Lt. Barrett King fight their way through the debris caused by the destruction of the IM86 to find Gunner Fox. The mission goes from rescue to recovery when they must deliver a body home.

Acclaimed for his fact-based fiction, Bobby Akart once again masterfully mixes science with suspense in this Gunner Fox trilogy, the Asteroid series.