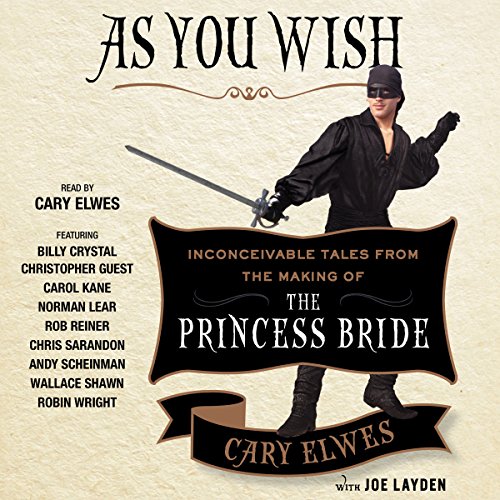 From actor Cary Elwes, who played the iconic role of Westley in The Princess Bride, comes a first-person account and behind-the-scenes look at the making of the cult classic film filled with never-before-told stories and interviews with costars Robin Wright, Wallace Shawn, Billy Crystal, Christopher Guest, and Mandy Patinkin, as well as author and screenwriter William Goldman, producer Norman Lear, and director Rob Reiner.

Cary Elwes was inspired to share his memories and give fans an unprecedented look into the creation of the film while participating in the twenty-fifth anniversary cast reunion. In As You Wish he has created an enchanting experience; in addition to interviews with his fellow cast mates, there are plenty of set secrets and backstage stories.

With a foreword by Rob Reiner, As You Wish is a must-have for all fans of this beloved film.

I love the original book - I mean the princess bride.
I love the movie.
And I love this book. A great view behind the scenes. Learned a lot of new things about the making of the movie as well as the actors.
I don’t really often hear audiobooks. But I recommend this one a lot. Have fun.

The Princess Bride....truly "As You Wish"

One of the best films ever made - this wonderful 'behind the scenes' labour of love, written and narrated by Cary Elwes with guest voice appearances by others intimately involved with the production - is a wonder and delight in its own right - a joyous tribute to the filming of an ageless story. I've watched the film literally hundreds of times - and will no doubt be enjoying this tribute repeatedly as well. It offers everything promised by 'Grandpa', bringing tbe listener to tears by its poignancy - and laugjhter by its content. I recommend this audio version to one and all. It is truly 'As you wish'.