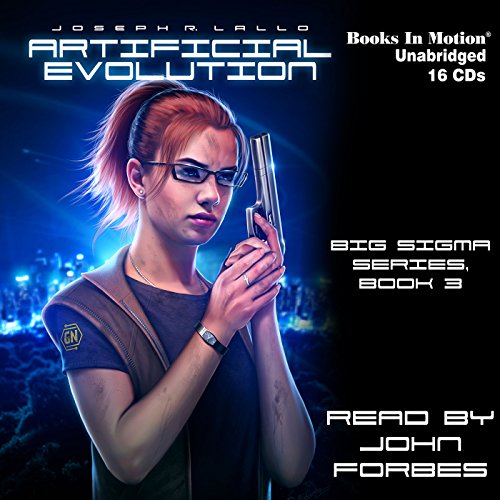 Artificial Evolution is the third book in the Big Sigma series, building upon the story and characters introduced by Bypass Gemini and Unstable Prototypes.

Lex, Michella, and Squee are once again joined by the mercenaries Silo and Garotte. Along the way they'll need plenty of help from mad engineer Karter Dee and his AI Ma.

After butting heads with the megacorporation known as VectorCorp, it was only a matter of time before Lex Alexander and his girlfriend, Michella Modane, would face the consequences. It is remarkable what a single corporate agent with the resources of a multiglobal conglomerate can do to a person's career. In the space of a few days, Lex is looking for work, and Michella is feeling pressure from the network to ease off the hard-hitting stories. Not one to be silenced, Michella quickly hatches a plan to continue her investigations under the guise of a fluff story about a so-called extraterrestrial, and who better to be her personal driver than Lex?

Meanwhile, mercenaries Silo and Garotte are still nipping at the heels of the terrorist group known as the Neo-Luddites. Rumors of an attempt to secure a devastating weapon bring the pair to a forgotten little planet in an undeveloped corner of the galaxy. Circumstances require that local authorities lay claim to the terrorists' apparent target, but what sort of threat could one gangly collection of anatomical curiosities pose to the galaxy? The answer to that question will put our heroes to the test and leave a whole world hanging in the balance.