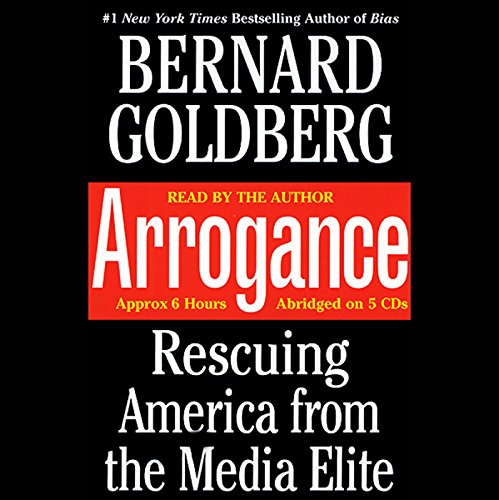 In his #1 New York Times bestseller, Bias, Emmy Award-winning journalist Bernard Goldberg created a national firestorm when he exposed the liberal biases of the so-called mainstream media. Now, in his new blockbuster, Goldberg goes even further. He not only takes on Big Journalism, but offers a twelve-step program to help the media elites overcome their addiction to bias.

In Arrogance, Goldberg punctures the bubble in which the media elites live and work, a culture of denial where contrary views are not welcome. He shows how they base their stories on assumptions many Americans don't share-which inevitably leads to biased reporting and slanted news. With blistering wit and passion, he names names and builds his case, revealing: ¿ How the media's coverage of the Jayson Blair scandal missed far more serious problems at the New York Times
¿ How some of the toughest watchdogs in journalism became Hillary Clinton's lapdogs
¿ Why the media refuse to shoot straight when the subject turns to guns
¿ What the real truth is behind the Ms.-information put out by feminists and passed on to you by their friends in the media
¿ Which CBS News icon is "transparently liberal," according to commentator Andy Rooney
¿ Which Hollywood celebrities say the dopiest things about America
¿ Why some think the top journalism school in America is an intellectual gulag
¿ Why the only kind of diversity you cannot find in a lot of newsrooms is a diversity of ideas
¿ How some journalists, like Bob Costas and Tim Russert, do get it ¿ and how they think American journalism can be made better.
Arrogance is one of those rare programs that can change not only a powerful American institution, but the American landscape as well.