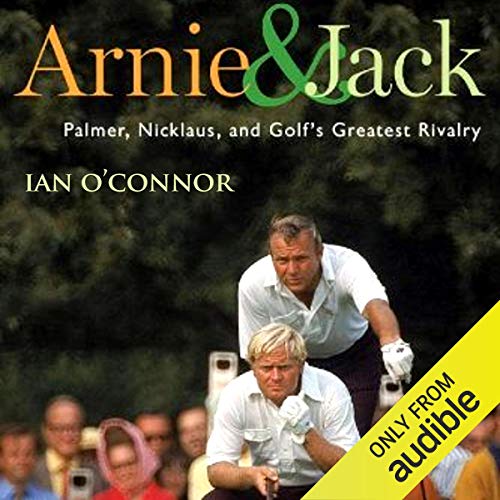 Surprisingly, one of sport’s most contentious, complex, and defining clashes played out not in the boxing ring or at the line of scrimmage but on the genteel green fairways of the world’s finest golf courses. Arnie and Jack. Palmer and Nicklaus. Their 50-year duel, in both the clubhouse and the boardroom, propelled each to the status of American icon and pushed modern golf to the heights and popularity it enjoys today.

Yet for all the ink that has been spilled on these two essential golf figures individually, no one has ever examined their relationship in this way. Arnie was the cowboy, with rugged good looks, Popeye-like forearms, a flailing swing, and charm enough to win fans worldwide. Jack was scientific, precise, conservative, aloof, even fat and awkward. Ultimately, Nicklaus got the better of Palmer on the course, beating him in major victories, 18-7. But Palmer bested Nicklaus almost everywhere else, especially in the hearts of the public and in endorsement dollars - Palmer was the top-grossing athlete for 30 years, until Michael Jordan surpassed him.

With dogged reporting and crisp, colorful storytelling, the award-winning sports columnist Ian O’Connor explores this heated professional and personal battle in fascinating, intimate, and revelatory detail. Drawing on unique and exclusive access to Palmer and Nicklaus, and informed by some 200 new interviews, O’Connor illuminates the two men’s extreme differences and sprawling influence through mini-dramas, such as their little-known first meeting on the course at the topsy-turvy U.S. Open in 1962, their early involvement with marketing and a small agency called IMG, and their intense competition for golf-course designs in their later years.