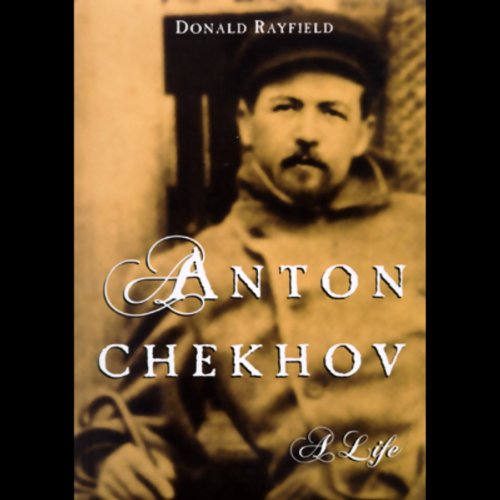 Anton Chekhov's life was short, intense, and dominated by battles, both with his dependents and with the tuberculosis that was to kill him at age 44. He was one of the greatest playwrights and short-story writers ever born, but he was torn between medicine and literature, as he was between family and friends, between a longing for solitude and a need for company. When he was a child, his family life was at times made a hell by a monstrous father, a possessive sister, and delinquent elder brothers; his own adult life was tortuously balanced between the affections of a series of mistresses and a marriage to an actress that was not as idyllic as it has traditionally been painted.

Donald Rayfield's biography strips the whitewash from the image of Chekhov and shows us what lay behind his restrained, ironic facade. The result does not denigrate him but shows him in the full heroism of his brief, prodigiously creative life. Rayfield has spent more than three years combing the Chekhov archives all over Russia (Chekhov was a restless traveler for the whole of his life, going from Siberia to the Cote d'Azur) and has uncovered thousands of documents and letters from Chekhov's lovers, friends, and family, most of them never published before, which cumulatively tell of a life far more entangled and turbulent than we ever previously suspected.

Anton Chekhov is a vivid portrait of Russia and Russian society 100 years ago, as well as an investigation of the emotions, ideas, conflicts, and experiences that Chekhov built into his stories and plays. Above all, it is the moving story of an artist's sometimes ruthless, often covert fight to save his creativity from strangulation by illness and family. It will establish itself as the definitive modern biography.

"Rayfield has done Chekhov and his readers a great service. His efforts have uncovered a Chekhov, complex, troubling and ambiguous, who finally feels right as the man behind the art." ( The New York Times Book Review)