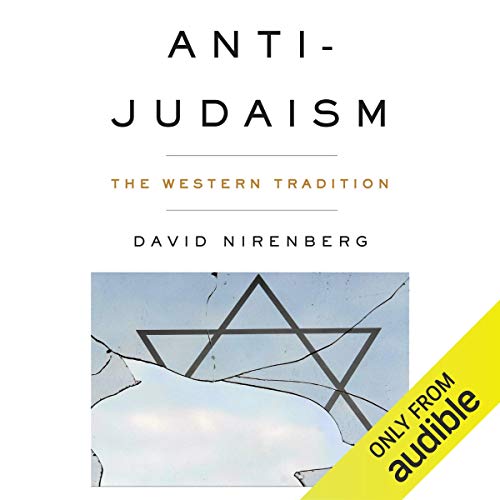 While Judaism is the central progenitor of the great Western religions, how central has it remained to Christian, Muslim, and even pagan thought? According to University of Chicago Professor of Medieval History and Social Thought, David Nirenberg, Judaism is so central that western thought has been driven in part by a rigorous attempt to deny it.

Anti-Judaism, Nirenberg argues, has been a major aim and rhetorical tactic not only in Western religious thinking, but also in the development of secular philosophy from ancient times to modernity. In a scholarly and erudite style, prolific voice actor Robert Blumenfeld gives color to the fascinating deployment of anti-Judaism from Ancient Greeks and Romans to the Protestant Reformers and continuing as the hallmark of the Third Reich.

A powerful history that shows anti-Judaism to be a central way of thinking in the Western tradition.

This incisive history upends the complacency that confines anti-Judaism to the ideological extremes in the Western tradition. With deep learning and elegance, David Nirenberg shows how foundational anti-Judaism is to the history of the West. Questions of how we are Jewish and, more critically, how and why we are not have been churning within the Western imagination throughout its history. Ancient Egyptians, Greeks, and Romans; Christians and Muslims of every period; even the secularists of modernity have used Judaism in constructing their visions of the world. The thrust of this tradition construes Judaism as an opposition, a danger often from within, to be criticized, attacked, and eliminated. The intersections of these ideas with the world of power - the Roman destruction of the Second Temple, the Spanish Inquisition, the German Holocaust - are well known. The ways of thought underlying these tragedies can be found at the very foundation of Western history.