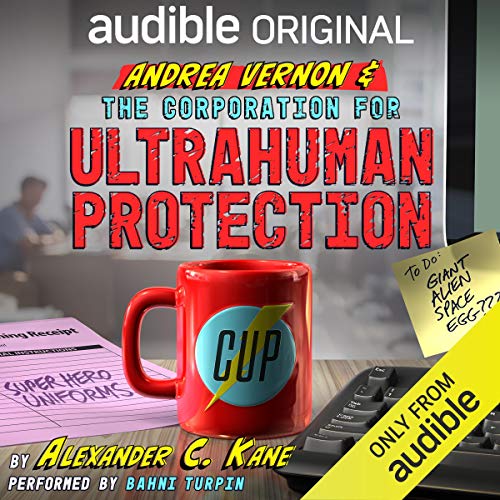 Andrea Vernon and the Corporation for UltraHuman Protection

Think superheroes are tough? Try having one for a boss, or co-worker. That’s the predicament Andrea Vernon finds herself in as the heroine of Alexander C. Kane’s debut audiobook. Drowning in debt, and forced to move back into her parents’ Queens apartment, Andrea starts looking for a job. Luckily for her, she finds herself recruited—well, really kidnapped—by the Corporation for UltraHuman Protection (C.U.P.), an organization that deploys superheroes. Suddenly Andrea must contend with co-workers who can shoot lightning from their fingertips, face the imminent destruction of humanity, and juggle a fledgling romance with a giant lumberjack. It’s all in a day’s work for the would-be novelist turned superstar secretary.

Audible Hall of Fame narrator Bahni Turpin is perfectly cast as a normal person finding herself in abnormal circumstances. Turpin brings to life an entire cast of quirky characters, along with their heroically funny antics in the cubicle next door. If you’ve ever wondered what a genetically altered rhinoceros sounds like, or needed to take a break from your own office drudgery, this is the comedy for you.